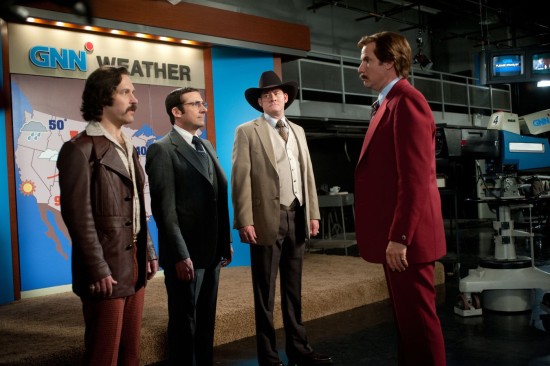 Today’s release of Anchorman 2: The Legend Continues: Super-Sized R-Rated Version will be the last time, outside of revival screenings, you’ll get to see Ron Burgundy and the Action 4 News Team on the big screen. Anchorman and Anchorman 2 director Adam McKay is stating in no unequivocal terms that there will not be a third installment of the comedy franchise.

That is a hard line to take given that Anchorman 2 outgrossed the original film at the box office, with this week’s stunt re-release and April’s home video release sure to add significantly to that amount. This is definitely the kind of money that spawns additional sequels.

But I can see McKay’s point. Sometimes, despite their initial success, comic characters can quickly overstay their welcome, becoming the equivalent of that person who made a good joke earl on at a party, only to repeat the joke ad nasuem for the rest of the evening. In other words, the Austin Powers franchise.

However, I can see the practical considerations in McKay’s pronouncement as well. Coordinating the schedules of the franchise’s stars – Will Farrell, Paul Rudd and Steve Carrell especially – was a herculean effort for the sequel. I could see that being as big, if not a bigger obstacle to try and surmount for a potential Anchorman 3.

Personally, as much as I love Anchorman, I am fine with this decision. The second film did start to feel a little bit thread-worn around the edges for me. Not enough to really impact my enjoyment of the film, but just enough to make me think that a third film would start to suffer under the laws of diminishing returns.

About Rich Drees 6757 Articles
A film fan since he first saw that Rebel Blockade Runner fleeing the massive Imperial Star Destroyer at the tender age of 8 and a veteran freelance journalist with twenty years experience writing about film and pop culture.

A field of Best Director Oscar novices will most likely make way for last year’s winner to repeat. [click for more]

Ready to pay to see the comedy a few days early? [click for more]

There Will Be No ANCHORMAN 3 http://t.co/HWOOzEwBZC

“Coordinating the schedules of the franchise’s stars – Will Farrell, Paul Rudd and Steve Carrell especially – was a herculean effort for the sequel.” That’s actually why there’s no Zoolander sequel yet despite ben stiller wanting to do one. There’s too many successful people to coortdinate their schedules so it keeps getting kicked.