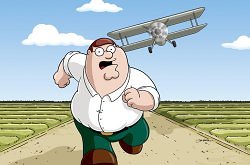 You know that Family Guy movie that gets mentioned every couple of years? Well, we’re going to have to wait a bit longer for it.

During a panel for the FOX Network long-running animated series, producer and sometimes episode director Peter Shin addressed the continuing rumors about a possible big screen version of the show, but that it is series creator Seth MacFarlane’s burgeoning career directing, and sometimes starring in, live action films that has delayed the project. Specifically, according to Deadline, he stated “We started some work on one a while ago, but it’s been put on hold. It might move forward in the future.”

A Family Guy movie has been talked about for the last six years or so, since MacFarlane mentioned the possibility of one at summer 2008’s Television Critics Association press tour. In 2012, MacFarlane stated that the idea that they have is “definitely something you could not do on the show, which to me is the only reason to do a movie.”

Normally, we do not pay too much attention to the news that comes out of the summer press tour of the Television Critics Association because, after all, this is not TV Buff On Line. However, one bit of [click for more]

The series creator says that they finally have an idea for a big screen adventure. [click for more]