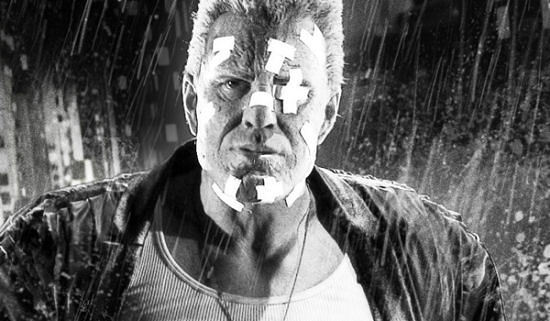 While most of yesterday’s Sin City panel at San Diego Comic Con was simply promotion for the forthcoming Sin City: A Dame to Kill For, which opens on August 22nd, there was one juicy tidbit of new information–work has already begun on a third installment of the franchise.

There is quite a number of Sin City stories from the comics that have yet to be adapted, notably “And Behind Door Number Three…” and  “The Babe Wore Red” from The Babe Wore Red and Other Stories, “Silent Night”, “Daddy’s Little Girl”, “Fat Man and Little Boy” and “Blue Eyes” and “Rats” from Lost Lonely and Lethal, “Wrong Turn” and “Wrong Track” from Sex & Violence, and the comple graphic novels Family Values and To Hell and Back. Miller has said that another story might come out before Sin City 3, and the latest film illustrates that he will be willing to write for the screen as well.

Of course, A Dame to Kill For has to be a hit before a third film is made, but with the technology Rodriguez and Miller uses to shoot these films, they could start shooting immediately after the first week receipts are tallied.

The Oscar-nominated actor dies two-months after suffering a heart attack. [click for more]

1. Inglorious Basterds (Universal, 3,165 Theaters, 153 Minutes, Rated R): The criticism aimed at Quentin Tarantino’s last effort–“Death Proof” in Grindhouse–was that he played up to his own excesses, that it was too much of [click for more]

In what form and how big a part is not yet clear. [click for more]