In 10th Grade, my Social Studies class was given the assignment of doing a report/biography of a famous person. I’m sure the teacher was expecting everyone to stick to the world of politics or history, but the profile could have been done on anyone we found interesting or wanted to find out more about. For me, that could only be one person.

I did my biography on Robin Williams. 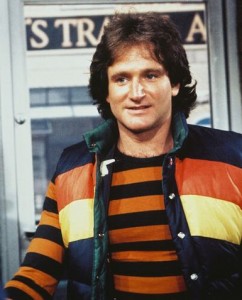 See, I was part of the Mork generation. Just as my parents had Lucy Ricardo or Ralph Kramden, or other kid’s parents had James T. Kirk or Perry Mason, Mork from Ork (along with the Fonz, Michael Knight and B.A.Baracus) was a television character I could call my own. I was six when Mork & Mindy came on the air and ten when it went off, so I can’t say that I picked up on the more adult humor in the show, but I was able to enjoy the goofy silliness and appreciate Williams’ manic energy in the lead role. It was a role that if not custom made for Williams, was one he took by the scruff of the neck and made his own.

And my love for Mork quickly became a love for Robin Williams. I became a big fan, and being a fan reaped benefits. Williams was a legendary name in stand-up comedy and luckily, through two parents that trusted that I was mature to handle it and an inexplicably free HBO subscription, I got to see some of his classic comedy specials as they happened, and, of course, I loved them. I might have Robin Williams to blame for my mind straying towards the vulgar in my sense of humor, but I also have him to thank for a long-lasting love and appreciation of stand-up comedy, one that spilled over onto his contemporaries, reached backed to his influences, and continues today in the comedians that followed in his footsteps.

Robin Williams also broadened my movie tastes as well. Williams didn’t take the easiest path from TV to Film, which would have been finding a project that resembled Mork & Mindy and work in his comfort zone. Instead, he took chances in his film roles, more often than not in films that were more dramas than comedies. He betrayed expectations in Robert Altman’s Popeye, and followed that with the excellent The World According to Garp. 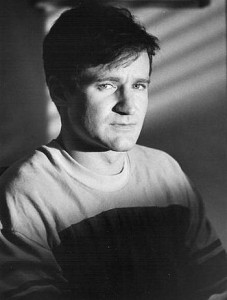 Garp was a film, once again thanks to my trusting parents and the illicit HBO mysteriously appearing in our house, that I saw much sooner than I should have. But I am glad I did. The ads made it seem like a zany comedy that you’d expect to see Williams in, but in reality Williams was an island of normality in a sea of craziness. It was a great performance and the film remains one of my favorites to this day.

The World According to Garp started Williams down a long and successful film career, and started a filmography that would be the envy of many actors: Good Morning Vietnam, Dead Poets Society, Awakenings, The Fisher King, Aladdin, Mrs. Doubtfire, Jumanji, The Birdcage,  Good Will Hunting and Insomnia. There’s a lot of great films in that list, and not two similar performances in any of them. Just looking at that list makes you appreciate just how much a skilled and versatile actor Robin Williams really was.

Williams would garner three Best Actor Oscar nominations (for Good Morning Vietnam, Dead Poets Society, and The Fisher King) and an Oscar for best Supporting Actor for  Good Will Hunting. He would also win two Emmys and six Golden Globes during his career.

And. in all fairness, Williams also had a long list of critical and commercial failures mixed in with those successes. But Williams was a rare actor who would rise above the material and provide an intriguing performance no matter how good or bad the film was. His performance might be the only good thing about these particular films, but he never seemed to be phoning it in and always brought something of value to the part. 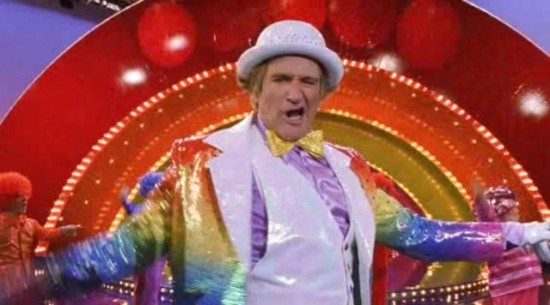 One particular “failure” has a special meaning to me. Death to Smoochy was not a success by any stretch of the imagination, but it holds a special place in my heart being the first movie I took my wife to on our second date. The film became a bonding experience between us and 12 years later, my wife and I are still together. That’s another thing I have to thank Robin Williams for.

In times of tragedies such these, if you’re like me, you like to revisit the artist’s work as a form of tribute. With Williams, you have a lot of quality work to choose from. But if you’d like a lesser known film that shows Williams’ talents, I have three suggestions for you: Cadillac Man, The Big White and Dead Again. The first two didn’t play well with the critics, Cadillac Man might be a bit hard to find and The Big White went straight to video, but I loved both those films and Williams was great in both of them. And I consider Dead Again a modern classic that doesn’t get the respect it deserves. However, Williams only has a small part on that one, but it’s a juicy role. According to IMDB, Williams will also has three films in post-production: one called Merry Friggin’s Christmas, which does not have a release date, Terry Jones’ Absolutely Anything which is set to be released next year, and the third Night at the Museum movie, Secret of the Tomb, which will be in theaters December 19th.

Many undeserving people are anointed with the title of legend these days, but it fits on Robin Williams. All you have to do is look on social media to see how many lives Williams has touched and how much enjoyment he has brought to the world. We fans are united in our sorrow, but our sadness is paltry compared to what Williams’ close friends and family must be experiencing, and my heart goes out to them. My one hope is that if there is any good that comes out of this, is that people suffering from depression or experiencing suicidal thoughts will be compelled to seek professional help. That would be a good legacy to leave behind, joining the sterling one Robin Williams left behind in the world of film.

Comparing Stan Winston’s legacy to that of Cecil B. DeMille or Orson Welles might be viewed as some as being sacrilege. After all, special effects and make-up artistry is considered secondary to writing, acting or [click for more]

The American Bandstand host had experience in film as an actor and producer. [click for more]

I as well, watched Robin Williams on HBO. In fact, I still have a VHS copy (if I can find it) of Live At The Met. Which is true comic genius.