In a multi-part series, Comic Book Film Editor William Gatevackes will be tracing the history of comic book movies from the earliest days of the film serials to today’s big blockbusters and beyond. Along with the history lesson, Bill will be covering some of the most prominent comic book films over the years and why they were so special. This time, we look at how Marvel Studios’ star rose to highest heights by overcoming some bumps in the road.

After the success of Iron Man, Marvel Studios was ready to take some risks. The next two heroes they would tackle , Thor and Captain America, had some name recognition, but also some drawbacks. The former was a figure from Norse mythology who had a day of the week named after him, but was a fantasy character, a genre that does not play well on the big screen. The latter was arguably Marvel’s third most well known character, being referenced in everything from Easy Rider to a Guns ‘n Roses song. But he was also a jingoistic character being introduced into a film world where foreign grosses are so important and anti-American sentiment is very high.

However, Marvel needed to introduce Thor and Cap into the cinematic universe if it wanted an Avengers film to be made–comic book fans would never forgive them. So Marvel willingly tackled these challenges and more that came their way–including release date changes, shifting directors and writer’s strikes–in order to get these films made.

Originally, Thor was scheduled to hit June 4, 2010, just under a month after Iron Man 2, and Captain America on May 6, 2011, just two months before Avengers was to arrive on July 15 in that year. Unfortunately, in March of 2009, Marvel announced that the films would be pushed back–Thor to June 17,2011 (although later moved forward to May 6, 2011 to take the spot of the cancelled Spider-Man 4), Captain America to July 22, 2011, and The Avengers to May 4, 2012. Marvel stated the change was to “strongly sequence Marvel’s movie debut dates, big-screen character introductions and momentum,” but surely other reasons played a part as well.

One of those other reason might be the changing of the directorial guard that Thor went through. The first director hired by Marvel to helm the film was Matthew Vaughn. Vaughn was hired in August of 2007 and set about rewriting Mark Protosevich’s script in time for a late 2008 shooting date. However, Vaughn was off the project by May 2008 when his holding contract expired. Official word had it that he was released, but this wasn’t the first comic book film he walked away from. Who knows what the real story was?

This set Marvel on a search for a replacement. Guillermo del Toro briefly considered joining on, but chose to devote his energies to The Hobbit instead. Marvel eventually chose Oscar Nominated-director Kenneth Branagh to helm the film in December of 2008, just a few months before the release date change was announced.

Branagh followed the Marvel template of casting award worthy actors in supporting roles, including Oscar winner Anthony Hopkins as Odin, then-Oscar nominee and future Oscar winner Natalie Portman as Jane Foster, and Golden Globe winner Idris Elba as Heimdall, and casting relative unknowns in the leads. But what great finds those unknowns have turned out to be.

Chris Hemsworth made his name on Australian television at the time he signed on for Thor, but American audiences only knew him from his work playing Captain Kirk’s doomed father in 2009’s Star Trek reboot. But Marvel was ahead of the curve as Hemsworth went on to become a leading man of note in Hollywood, starring in films such as  The Cabin in the Woods, Snow White and the Huntsman, Red Dawn and Rush after Thor. But where he really excelled is in playing the God of Thunder, a man who was at once arrogant and charming, brave yet selfish, and cunning yet a bit obtuse. It was a hard role to pull off without the right actor. Hemsworth was the right actor.

But casting Tom Hiddleston as Loki was a stroke of genius. Like Hemsworth, Hiddleston was mainly known for his television work in Britain. He came over and auditioned for the role of Thor. He didn’t get it, but Branagh, who worked with Hiddleston before, most notably on the British TV series Wallander, offered him the role of Loki. Hiddleston attacked the role as if it was one of Shakespeare’s classic villains. Loki was vile and depraved, but Hiddleston made sure that audiences saw the hurt and pain that motivated all of his actions.

The film dealt with an exiled Thor, stripped of his position and power by Odin due to a poorly thought out attack on an ancient enemy of Asgard, stuck on Earth. While on Earth, Thor strikes up a romance with an astrophysicist named Jane Foster in preparation of his eternal stay on our planet. However, when Loki uses Thor’s absence and Odin passage into a deathlike sleep as a power grab, Thor must prove himself worthy to combat his half-brother, even if it kills him.

The film was good, much better than I’d ever think a Thor film could be. There was a lot of humor to go along with the adventure. I think making the Asgardians scientifically advanced aliens was a nice touch that kept the concept grounded with what had come before in the cinematic universe. The only major misstep the film took in my opinion was the romance between Thor and Jane. There was not enough time devoted to the pairing to make the love connection feel real.

The film was also a cameoapalooza. In addition to Stan Lee’s obligatory cameo, we had cameos from the film’s screenwriter and one-time writer of the comic J. Michael Straczynski, writer Walt Simonson and his wife Louise, and Marvel editor Ralph Macchio. But perhaps the biggest cameo was that of Jeremy Renner, who made an appearance as a S.H.I.E.L.D. agent named Barton. Comic book fans instantly recognized him as Clint Barton, a.k.a. Hawkeye.

The post-credits scene focused on Nick Fury turning to Thor’s ally Dr. Eric Selvig (Stellan Skarsgård) to investigate a powerful item called the Tessaract. Unfortunately, Selvig appears to be in the sway of Loki, which could only mean bad things.

It took several months for movie fans to find out more about the Tesseract (comic fans already knew it as the Cosmic Cube) in Captain America: The First Avenger. 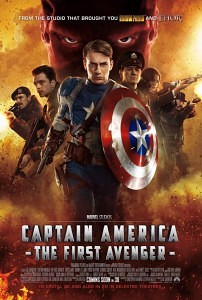 This film also hit a development snag, this time due to the Writer’s Guild strike of 2007-2008. Marvel decided to make a separate agreement with the union to avoid delaying their production schedule any more than they had to. Joe Johnston was Marvel’s first choice for a director, brushing off offers from former Marvel directors Jon Favreau and Louis Leterrier to helm the film.

For Cap, they cast Chris Evans, an actor who at the time had performed in no less than five comic book films, most notable as Johnny Storm in the Fantastic Four films. I have to admit, I had concerns with this casting at first. Evans was known for playing glib smart-asses with a heart of gold. Except for the heart of gold part, that wasn’t Captain America. I wondered if they were making a major personality change in the character from the comics or did Evans have much more depth in him as an actor.

Thankfully, it was the latter. Steve Rogers is a tough role to play, as characters with strong moral values are hard to portray, or at least hard to portray convincingly. But Evans nailed it. He made a nice, honest, forthright man captivating, and made sure that we knew that Captain America was a hero before he ever got the super-soldier serum, the costume or the red, white and blue shield.

The film followed Steve Rogers, a man who desperately wants to serve his country as it toils through World War II. Unfortunately, Rogers is 4-F, and no matter how many times he tries to enter the army, they won’t  have him. However, his dedication to serving for all the right reasons catches the attention of a Doctor Erskine (Oscar Nominee Stanley Tucci), who thinks Rogers is perfect for his top-secret super soldier program.

Rogers goes through the process and turns from a 90lb weakling to the peak of human perfection. Unfortunately, before the serum can be used to create even more super-soldiers, Erskine is killed by assassins sent by the Red Skull (Hugo Weaving), a German who received an early version of Erskine’s formula.

At first, the government keeps Rogers safely away from the front lines until they can figure out Erskine’s formula. However, when Rogers’ childhood friend Bucky Barnes is captured by the Red Skull’s Hydra (an organization composed of Nazis that even Hitler thought were too extreme), Rogers defies orders to rescue his friend.

The bonus scene was essentially a commercial for the next year’s The Avengers.

Truth be told, I am a huge Captain America fan. He is my second favorite comic book character of all time, so I was predisposed to like this film. But I loved it. I loved the World War II setting, I loved Evans’ performance, and I loved the way they remained true to the comics while still making the film stand on its own. The only thing that gave me pause was the introduction of Hydra as an enemy to fight. At first, I thought it was a way to back away from having him fight Nazis, a classic film villain from Casablanca all the way through Indiana Jones and the Last Crusade, in order to make it more palatable for international audiences. However, I now see it as a way to give Cap and the rest of the heroes a tyrannical villain to fight even in modern times.

Next time up, we will close out Phase I with the film that changed Marvel, comic book films, and cinema in general forever–The Avengers.

The THOR: RAGNAROK director us returning for the franchise’s fourth installment, although it delays Warners’ AKIRA even further. [click for more]

R-Rated superhero movies are all the rage. But Warner Brothers is showing that just because you can make them doesn’t mean you should. [click for more]

HISTORY OF COMIC BOOK FILMS: The Rise And Fall Of Frank Miller

Frank Miller was the biggest name in comics and movies until hubris stepped in. [click for more]