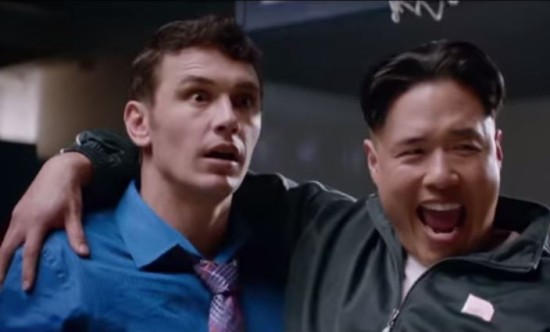 The weekend was awash with rumors and speculation as to what the ultimate fate of Sony Pictures comedy The Interview will be. Earlier in the week, the studio announced that it would be cancelling the planned Christmas Day release for the film which depicted an attempt by two bumbling journalists to assassinate the North Korean dictator Kim Jung Un following terroristic threats against theaters who would exhibit the film.

After President Obama criticized the move to withdraw the film a “mistake” at his year-end press conference on Friday, Sony Entertainment CEO Michael Lynton stated in an interview with CNN’s Fareed Zakari that the studio was still considering some form of online release. That sentiment was reinforced later that day when Sony released a statement saying that in the wake of the cancellation of the theatrical release –

[W]e immediately began actively surveying alternatives to enable us to release the movie on a different platform… It is still our hope that anyone who wants to see this movie will get the opportunity to do so.

Lynton also reiterated the studio’s initial blame shift that the cancellations was due to the number of theater chains who were balking at exhibiting the film.

Early yesterday morning, the New York Post reported from anonymous sources that Sony would release The Interview on the streaming service Crackle, which they conveniently own.

The announcement raised eyebrows immediately, as Crackle is a free, ad-supported streaming service, not one that derives its income from subscriptions, which would certainly be a big revenue stream boast based on the interest in the film.

A Sony spokesperson denied the report later in the day stating “The Post story isn’t accurate, and Sony is still exploring options for distribution.”

Sony attorney David Boies appeared on NBC’s Meet The Press to further elaborate that the studio is still weighing its options.

Meanwhile BitTorrents has offered to distribute the film free online while hacker coolective have threatened to release the film online on Christmas Day.

The accusations surrounding the cyberattack on the motion picture studio in 2014 are just part of a larger indictment. [click for more]

Sony Pulls THE INTERVIEW From Theaters

Because, really, where were they going to show it? [click for more]

THE INTERVIEW: Will They Or Won’t They Release It?:
The weekend was awash with rumors and speculation as to w… http://t.co/EYGyV1aO9J