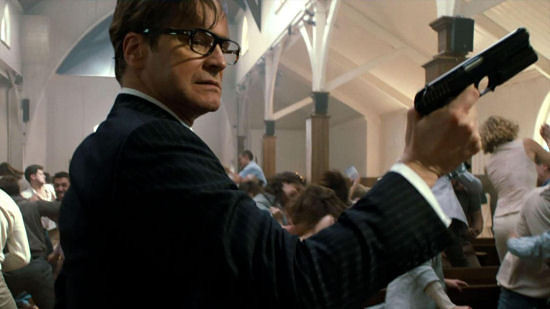 That’s the checklist that Twentieth Century Fox is probably working from for this past winter’s Kingsman: The Secret Service, the Colin Firth-starring film that has cleared over $400 million at the international box office. Given that it only had an $81 million budget, it certainly performed well enough for the studio to start work on a sequel and The Wrap has confirmed that the studio is pushing forward on just such a follow up.

Exactly who will be working on the sequel isn’t clear. The Wrap had no reportage on any creatives attached to the project. I am sure that the studio would love to see director Matthew Vaughn return to guide the sequel, but he is currently working on developing a number of projects for the studio including a new Flash Gordon film based on the classic science-ficion comic strip, The Golden Age, a comic book adaptation about superheroes in a retirement home and a biopic of Eddie “The Eagle” Edwards, the UK’s first Olympic ski jumper. It should be interesting to see how the studio prioritizes his schedule.

Mark Millar, co-creator of the comic book miniseries The Secret Service which the film was based on, served as a producer on the first film and will undoubtedly return in some capacity.

Is Matthew Vaughn In Talks To Direct STAR WARS: EPISODE 7?

The director may have dropped the latest X-Men film for his chance to go to a galaxy far, far away. [click for more]

Someone At Fox Should Be Fired For These X-MEN Posters

When I first saw the two new posters released by Twentieth Century Fox for their upcoming X-Men: First Class, I dismissed them on first glance as nothing more than something put together by an overly-enthusiastic, [click for more]

What can we decipher about the upcoming trilogy from this nugget of information? [click for more]