1. Entourage (Opened Wednesday, Warner Brothers, 3,100+ Theaters, 104 Minutes, Rated R for pervasive language, strong sexual content, nudity and some drug use, Rotten Tomatoes: 32% Fresh [102 Reviews]): I have a friend who introduced me to Entourage. We watched the first four or five seasons together before we fell out of the habit of it. I haven’t seen an episode in years and I can honestly say I don’t remember any particular story arc from the show outside the Aquaman bit. And I probably only remember that because I am a comic book geek.

So, for me, Entourage wasn’t a TV show that called for a film to be made or was a story that had unanswered questions that needed to be addressed. It wasn’t really a narrative that would lend itself to a big screen treatment either.

The story that the powers that be deemed film worthy is that Vince is about to make his directorial debut. Will the new stage in his life lead to Oscar gold, or will it lead to him losing everything he has built up over the years?

2. Spy (Fox, 3,650 Theaters,120 Minutes, Rated R for language throughout, violence, and some sexual content including brief graphic nudity, Rotten Tomatoes: 94% Fresh [117 Reviews]):  Melissa McCarthy is a box office draw. She is skilled at slapstick and broad humor. She can also be a pretty good actress. Unfortunately, she makes too many movies with too many people who lean too much on the former and not enough on the latter. The result is a movie where McCarthy falls down a lot but nothing else to test her acting skills.

This one might be different. This one reunites her with Paul Feig, the director of The Heat and the guy who helped her to an Oscar nomination in Bridesmaids. I imagine that she’ll fall down a lot, but there will be a lot of good character stuff in between pratfalls.

McCarthy plays CIA desk agent who is brought into an undercover assignment when her in-field partner goes missing. 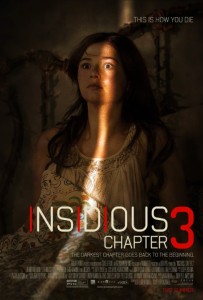 3. Insidious Chapter 3 (Focus Features, 3,000 Theaters, 97 Minutes, Rated PG-13 for violence, frightening images, some language and thematic elements, Rotten Tomatoes: 60% Fresh [50 Reviews]): The Insidious franchise has been one of those franchises that should have maybe ended after the first film, but kept on going and going. Why? Because that are incredibly cheap to make and gross and obscene amount of money.

The true test of whether this franchise will be able to keep going is this film. The main actors from the first two, Patrick Wilson and Rose Byrne (who is busy this week in Spy) have not returned. What we get is a prequel set before the events of the other films where Elise (Lin Shaye) investigates a similar case of a demon coming into our world and trying to possess and innocent child.

The film has a budget of $5 million, so it will be nigh impossible for it to lose money. And if the profits are as big as the rest in of the franchise, expect a fourth installment sooner rather than later.

About William Gatevackes 1966 Articles
William is cursed with the shared love of comic books and of films. Luckily, this is a great time for him to be alive. His writing has been featured on Broken Frontier.com, PopMatters.com and in Comics Foundry magazine.

It’s a weird week when a horror film is the best option for your moviegoing buck. [click for more]

Only one entry in the new releases this week–the eagerly awaited debut film of Spider-Man in the Marvel Cinematic Universe. [click for more]

The Fall Movie Season opens with a thud this week. [click for more]