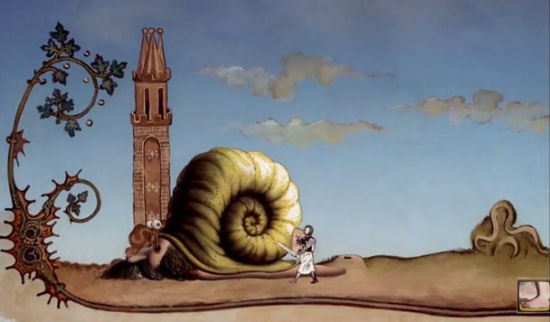 One of the key components to the success of Monty Python has been the animated segments from troupe member Terry Gilliam. Whether used to connect two sketches or being funny just on their own, Gilliam’s work was so integral to the group’s comedy that they made the transition to the big screen for the group’s films. For the upcoming blu-ray 40th anniversary edition of Monty Python And The Holy Grail, Gilliam has gone and unearthed some unused animation prepared for the film and provided a nice audio track as well.

On the commentary track, Gilliam jokes about why the footage was cut –

This in fact is probably the only reason to buy this new Blu-ray version of the film, for the new animation. In fact, it’s old animation, but its the animation that was cut out by the rather envious members of the group, who were trying to restrain a young, talented animator. A man who could have gone on to be a great animator, but no, he was forced into live-action filmmaking to cover the scars.

Also of note on the commentary track is Gilliam talking about some of the interesting and surprising inspirations that he drew on for the pieces in the film. We also get to hear part of a song cut from the film by frequent Python musical collaborator (and former member of The Bonzo Dog Do-Dah Band) Neil Innes.

The 40th Anniversary blu-ray edition of Monty Python And The Holy Grail hits shelves on October 27. You can order your copy from Amazon here

Gilliam’s PARNASSUS To Get US Distribution

Finally! Since it screened for potential buyers last Mat at the Cannes Film Festival, Terry Gilliam’s latest film, The Imaginarium Of Dr. Parnassus, has been searching for a studio to step up and distribute the [click for more]

Could We Finally Be Able To Watch The WATCHMEN?

Word out of Hollywood is that Fox and Warner Brothers might be close to a settlement in their rights dispute over the Watchmen movie. Per Film Esq., both studios filed a Notice of Settlement Status [click for more]

Director Terry Gilliam has confirmed today what had been speculated for some time now- that Johnny Depp, Jude Law and Colin Farrell will be stepping into the shoes of Heath Ledger to complete the late [click for more]