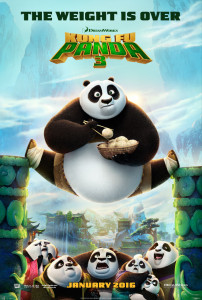 1. Kung Fu Panda 3 (Fox, 3,955 Theaters, 95 Minutes, Rated PG for martial arts action and some mild rude humor, Rotten Tomatoes Tomatometer at press time: 80% Fresh [51 Reviews]): When Master Shifu retires, it becomes time for Po to make the transition from student to master. Of course, Po being Po, nothing is ever that simple. His new job is complicated by the return of his birth father, who insists on taking him to a secret panda village. But when an evil Yak chi master comes to the village with destruction on his mind, Po must now teach his panda brethren how to fight if they are to survive.

This franchise keeps plugging along, as well it should as every installment has quadrupled its budget. Expect this one to come it, do its kung fu on the competition, and end up master of the box office this week.

2. The Finest Hours (Disney, 3,143 Theaters, 117 minutes, Rated PG-13 for intense sequences of peril, Rotten Tomatoes Tomatometer at press time: 57% Fresh [61 Reviews]): If you watch a lot of the Disney Channel, as I, the father of a six-year old does, you probably have noticed that Disney has gone heavy on the advertising of this film on that network. I find this odd.

No, not that Disney would take advantage of the free advertising that shilling one of their own movies on the channel they own brings, but why they would marked this film to that market, the tween and under crowd. Star Wars and the Marvel films, sure, their princess and fairy tale films, gotcha. Their animated fare, that’s a given. But a film about a sea rescue that took place almost 65 years ago? One that’s rated above the networks age demographic? That smells desperate to me.

Anyhow, the film tells the story of the real life Coast Guard rescue of the SS Pendleton during a horrific storm back in 1952.

3. Fifty Shades of Black (Open Road Films, 2,075 Theaters, 92 Minutes, Rated R for strong crude sexual content including some graphic nudity, and for language throughout, Rotten Tomatoes Tomatometer at press time: N/A [The films has been held back from reviewers]): Does Fifty Shades of Grey really need to be parodied? I mean, yeah, on one hand, I guess it does, being that it was a global phenomenon that made a bazillion dollars. But the book and movie were absurd enough to almost be a parody of itself. Any parody of it will seem almost too heavy handed and might turn out fairly awful.

Which brings us to the fact that the film has not been released to critics, so there are no reviews of it. That is a sure sign that the film is bad, bad, bad.

If you’ve seen the first film, you should know what this one is about. We don’t fault you for going to see it, but expect it to be any good. 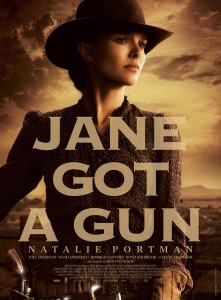 4, Jane Got a Gun (The Weinstein Company, 1,210 Theaters, 98 Minutes, Rated R for violence and some language, Rotten Tomatoes Tomatometer at press time: N/A [Only 4 reviews at press time, 1 positive and 3 negative]): It would be nice to think that Natalie Portman, Joel Edgerton and Ewan McGregor where just sitting around on the set of one of the Star Wars prequels and they all decided to that they’d like to do a western together.

Of course, that wasn’t what happened. The creation of this film was far more interesting. The script for the film appeared on the 2011 Black List and developed quite a bit of buzz. We Need To Talk About Kevin‘s Lynne Ramsay was set to direct and cast Portman and Michael Fassbender as the leads and Edgerton as the villain with a scheduled release date in August 29, 2014. Then Fassbender had to drop out due to scheduling conflicts. Edgerton was moved over to take over Fassbender’s part, and Jude Law was chosen to take over the villain role. Then Ramsay left, or, allegedly, failed to show up on the first day of shooting (yes, there was a lawsuit), leaving the producers to scramble to find a last minute replacement. Warrior‘s Gavin O’Connor stepped in at the last minute, but this move cost the film Jude Law, as he only wished to work with Ramsay. Bradley Cooper stepped in to the villains shoes, but only briefly because he had to leave due to scheduling conflicts as well. He was replaced by McGregor. Then the films original distributor filed bankruptcy and it had to find a new one.

But what is the film about, you may ask? It’s about a woman (Portman) who asks a gunslinger ex-lover of hers (Edgerton) to protect her husband (Noah Emmerich) from a notorious outlaw (McGregor).

About William Gatevackes 1953 Articles
William is cursed with the shared love of comic books and of films. Luckily, this is a great time for him to be alive. His writing has been featured on Broken Frontier.com, PopMatters.com and in Comics Foundry magazine.

I think there’s a movie coming out this week, but I’m not sure. Golly, I wish they advertised it more. [click for more]

1. G-Force (Disney, 3,697 Theaters, 89 Minutes, Rated PG): On paper, this could be one of the stupidest films ever made. After all, it is about a team of highly trained gerbils that the Government [click for more]