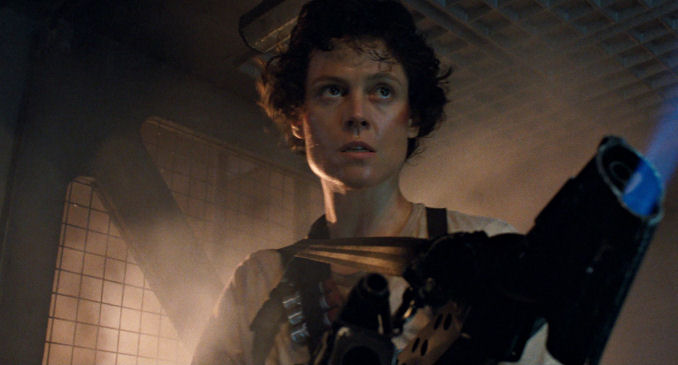 A few months back I revisited the Alien Quarilogy over the space of a week and was impressed by the work that franchise star Sigourney Weaver did over the course of the four films. Even in the latter and lesser two films she gives a much better performance than was perhaps deserved or needed. And it is nice to see that the actress can be just as gutsy and blunt as her on screen counterpart Ellen Ripley.

Speaking after a screening of Aliens in New York City last week, Weaver had some harsh words for studio Twentieth Century Fox’s attempt to squeeze blood out of two franchises – the two Alien Vs Predator movies from 2004 and 2007.

I haven’t seen them but heard the Alien doesn’t beat the Predator, and I thought ‘Fuck that!’

Smart move on Weaver’s part as it saved her four hours of her life. Fours hours that those of us who actually sat through those two films are never going to get back. And apparently that the sentiment that these films shouldn’t be bothered with is held at the studio now, considering that they have been pretty much ignored by Ridley Scott in his Alien prequel Prometheus and will be tossed aside, along with Alien III and Alien: Resurrection, by Neil Blomkamp’s in development Alien 5. (Presumably that number is going to change at some point.)

Via Den Of Geeks.

About Rich Drees 6814 Articles
A film fan since he first saw that Rebel Blockade Runner fleeing the massive Imperial Star Destroyer at the tender age of 8 and a veteran freelance journalist with twenty years experience writing about film and pop culture.

A follow-up on our article of last week, with alternatives as to where else you can spend your convention money. [click for more]

Oscar Nominations: Who Will Make The Cut

It’s that time of year again. This Tuesday, the Academy of Motion Picture Arts and Sciences will announce the nominees for the 82nd Annual Academy Awards. Every year there are snubs and surprises, thrills and [click for more]

Sigourney Weaver States She Is Returning For GHOSTBUSTERS Sequel

The GHOSTBUSTERS co-star confirms that she will be coming back for next summer’s reboot film from Jason Reitman. [click for more]