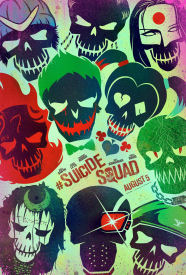 Well this is somewhat better.

After two stumbles right out of the gate with Man Of Steel and Batman V Superman: Dawn Of Justice, Warner Brothers’ latest entry into their cinematic adaptation of the DC Comics universe, Suicide Squad, is a much more enjoyable affair. It does still have some problems, but they are mitigated by the fact that writer/director David Ayer has delivered a story that still manages to entertain and not sink under the weight of its own self-importance.

In the interests of national security, Amanda Waller (Viola Davis) is given the go-ahead to create “Task Force X,” a black ops group composed entirely of supervillains. But when one of them, an inter-dimensional magic-user, manages to slip free from the supernatural control that has kept them in check and decides that it is time to wreck havoc on the world, the rest of the team is called in to stop them. Complicating things is the fact that Batman’s nemesis, the Joker (Jared Leto), is also after the team, intent on freeing his girlfriend Harley Quinn (Margot Robbie) from her impressment on the squad.

Suicide Squad does have a some similarities to 2012’s The Avengers. You have a team coming together and learning how to work past their differences towards a common goal. The group fights ins way through an army of faceless minions to get to the final bad guy, whose plan for world destruction involves shooting a bright blue light into the sky. But where The Avengers had several films to build up its main cast of heroes, Ayer only has a few minutes to sketch in the background for his ensemble. But he does a good job at bringing the audience up to speed on the various villains that make up his bad guy version of The Dirty Dozen. Usually in comic book adaptations, the villains are underwritten in terms of their character and motivations. They serve as nothing more than punching bags for the heroes, so it is refreshing to see the bad guys being fleshed out as three-dimensional characters. If anything, the fact that one squad member doesn’t get any real backstory before they set out on their mission red flags them as someone who will meet a rather quick end early on.

Visually, Ayer has retained the grey and steel blue color pallet from Zack Snyder’s two previous DC Extended Universe films. But here, it is far more appropriate than it is for a Superman story. The leads are anti-heroes, bad guys and gals in the truest sense of the word. Neither they, nor the movie itself, has any real interest in redeeming them, which is interesting and refreshing. And what is more interesting is that they are under orders from a woman who has absolutely no moral compunctions about what she does. She is not a character to root for. While I don’t think that the film has any intentions towards it, the character of Amanda Waller could certainly be seen as a critique or a warning for some current political foreign policy thinking.

For those wondering how the film would contribute to the overall world building of the DC Extended Universe, Suicide Squad does so in a few interesting ways. First off, we see that the creation of the Squad is a reaction to Superman’s death, continuing the theme of how the world reacts to superpowered beings within their midst that was touched upon in Snyder’s two previous films. Since this is the crux of the film, it feels much more organic than the ham-fisted acquisition of Lex Luthor’ files by Bruce Wayne in Batman V Superman. In fact, there is a mid-credit scene that does similar work but feels far more real in terms of story than what Snyder delivered.

What does this mean for the studio’s long term vision for their cinematic DC Comics Extended Universe? [click for more]

Crisis In A DC Expanded Universe: Heading For Another New Direction – Why?

After the success of WONDER WOMAN, the DC Expanded Universe appeared to be in great shape. So, obviously, they will be making changes. [click for more]

They join Margot Robbie, Jai Courtney and Cara Delevingne in the cast. [click for more]