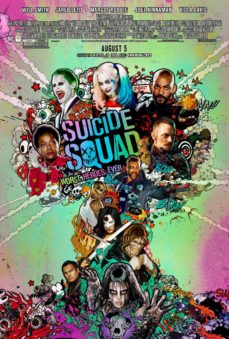 I actually had high hopes for this one. And that was after my initial hesitation after seeing what they did with the Joker. But. man, those reviews though. It’s hard to ignore those reviews.

FBOL Head Honcho Rich Drees saw it and had a relatively positive review of it (in spite of  telling people complaining about the reviews to be quiet in the most vulgar way possible.) So while I doubt there is a conspiracy, maybe the film is not as bad as people say it is. 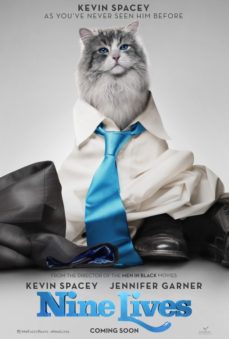 2. Nine Lives (EuropaCorp, 2,264 Theaters, 87 Minutes, Rated PG for thematic elements, language and some rude humor, Rotten Tomatoes Tomatometer at press time: N/A [There have been no reviews recorded. Not a one. Zip. Zilch. Zero.]: Suicide Squad might be depressing to think about, but it’s a joyride compared to this film.

Why? Well, the film has Oscar-winner  Christopher Walken in it, playing the same type of mystical shop owner he played in Blink. But he has a history of taking films for a paycheck, so that’s not that depressing. The film is directed by Barry Sonnenfeld, the man who directed Men In Black, The Addams Family and Get Shorty. Those are great films. He should be directing, well, anything else besides a man-turned-into-a-cat film.

Then we have Kevin Spacey. The two-time Oscar-winning actor, who plays the man who is turned into a cat. This is an actor who keeps getting Emmy nominations for House of Cards, playing the type of role Dean Jones played in order to keep his health insurance. That’s depressing.

But what’s scary is that there are no reviews. Even with an embargo or a holding back of a film from critics, we’d have at least one review by now. It’s like they sent a goon squad out to keep reviewer from filing their articles. That’s not a good thing.

New releases include DUNKIRK, VALERIAN AND THE CITY OF PLANETS and GIRLS TRIP. [click for more]

Top Ten NEW Mistakes Warners Has Made With DC Comics Films: When Will They Get It Right?

Way back in 2012, months before Warner Brothers was set to go down a new road with their DC Comics films with Man of Steel, I wrote a post here called Top Ten Mistakes Warners [click for more]

Don’t adjust your monitors. The image IS dark. [click for more]