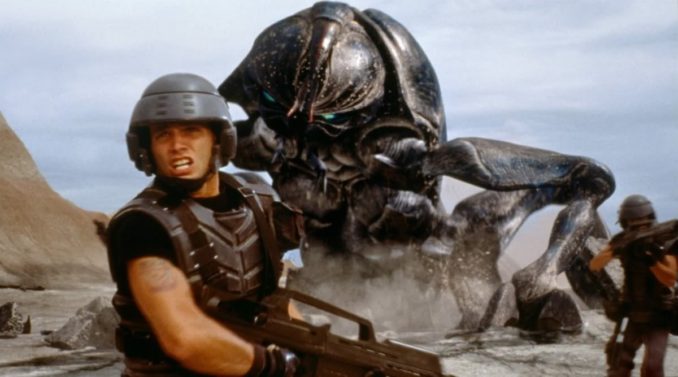 The Hollywood Reporter is stating that studio has hired the scripters of the upcoming Baywatch movie Mark Swift and Damian Shannon to write a new take on the material and will not be a remake or reboot of the previous film first adapted in 1997 by Paul Verhoeven. The Dutch director turned the story of an interstellar marine grunt who works his way up the command ladder in the midst of a war with invading aliens into a sly satire on militarism and fasciam that often aped propoganda films of World War Two as part of the satire. Although it received mixed reviews at the time, the film received critical reevaluation on home video and enjoys a much better reputation today. For their part, the studio managed to wring three direct-to-video sequels out of the franchise.

While I certainly recognize the good in Verhoeven’s original adaptation and have no problem in principal with someone looking to do something different with the material, I am a bit concerned that two of the producers involved, Neal H. Moritz and Toby Jaffe, were also involved in the recent remake of another Verhoeven film, Total Recall. To say that film was underwhelming would be an understatement as that film was awash with bad ideas and logic holes the size of that ridiculous tunnel than ran through the center of the Earth in that movie. Hopefully things will go better this time.

Those of you waiting for an adaptation of Marvel’s Deathlok might have found it in RoboCop. [click for more]

Is There A STARSHIP TROOPERS Remake In The Works?

Will we be seeing a new version of Heinlein’s classic novel in the big screen? [click for more]

Padilla States His ROBOCOP Will Be Different From The Original