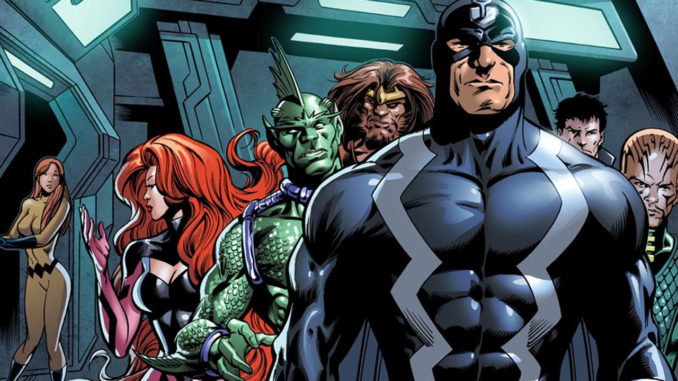 So, if you have been waiting for an Inhumans movie, I have good news and bad news for you. The good is that a two-hour Inhumans IMAX presentation will be shown in theaters for two weeks over the Summer of 2017. The bad news that this will be the first two episodes of an Inhumans TV series, which will be debuting on ABC next fall.

You can say the writing was on the wall for the Inhumans feature film when the concept was introduced on ABC’s Agents of S.H.I.E.L.D. two years ago. Marvel keeps its TV and film worlds on a one way street–events of the movies can influence the TV shows, but TV shows do not influence the films. When the characters first appeared on the TV series, it was only a matter of time before the feature film went away. It fell off the feature film schedule in April of this year and now we know where it landed.

Marvel’s publishing arm was giving the Inhumans a big push, at the expense of the X-Men character’s no less, in an effort to not only build up interest for an Inhumans film, but also hoping to have comics available if the movie was successful.  However, the Inhumans books Marvel has been publishing have not been selling too well. The characters are about to start a big event series where they face off against the X-Men, which should boost their sales, but you have to wonder if the lack of comic book fans’ interest in the concept was a reason why they went from film to television.

The two episodes will be co-financed by IMAX and the entire series will be shot using IMAX cameras.

The series is only for eight episodes set to debut in September, which means it will probably not fill in for Agents of S.H.I.E.L.D. when that show goes on hiatus like Agent Carter did, but might act as a “lead-in” to the series, airing before AoS premieres. That is, if the struggling AoS is renewed for a fifth season. The series has been posting the worst ratings of its run this season, and that’s after adding Ghost Rider to the program.

And while AoS is struggling, it is faring better that anything else Marvel tries to put on ABC. Agent Carter, a cult and critical favorite, was cancelled last season for having ratings to low to ignore. But at least it got on the air. Marvel’s Most Wanted was floated as another Marvel Cinematic Universe show on ABC, and it was passed on by the network–twice.

Taking this into consideration, you can see why Marvel would want to do something, anything, to bring attention to the new show. This is certainly a unique situation at play here. It will be interesting to see how this all pans out.

CAPTAIN AMERICA: THE WINTER SOLDIER Fallout – Where Does The Marvel Cinematic Universe Go From Here? (Spoilers)

Picking up the pieces and seeing how they reassemble for the future. [click for more]

Mark Harris, Edgar Wright, And The Bursting Of The Comic Book Film Bubble.

Mark Harris thinks that Agents of S.H.I.E.L.D. is the straw that will break the comic book film’s back. We think otherwise. [click for more]