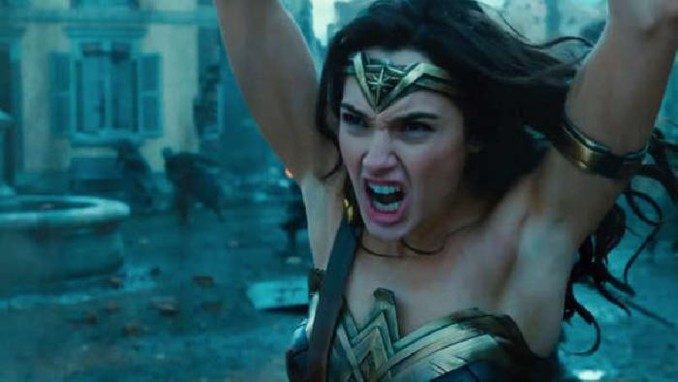 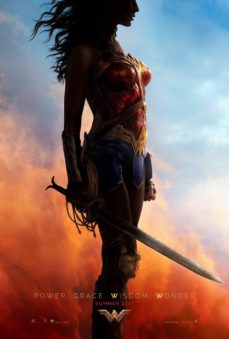 I have been critical of Warners’ attempts to bring their DC Comics characters to the big screen in the past, to such an extent I have been accused of taking bribes from Disney to bad mouth them. The truth is I love Marvel and DC just about equally. I desperately want the DC films to succeed, and all Wonder Woman had to do was to be merely good to make me to do backflips.

However, Wonder Woman was not a good movie. It was a great movie. In fact, one of the best comic book adaptations ever made.

It’s 1918 and war is raging all over the world except for the island of paradise called Themyscira. There the only combat you’ll find is the Amazons, a race of warrior women, undergoing combat training everyday. The train so they are ready to fulfill the purpose they were created for by the Greek gods to carry out–to defeat Ares if he ever should threaten the Earth. 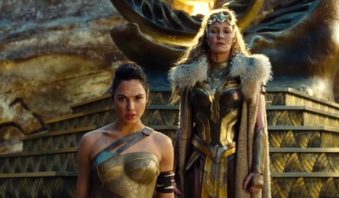 Soon, the war comes to Themyscira in the personage of Steve Trevor (Chris Pine). He is an American spy working for the British who crash lands his airplane in the waters outside the island while escaping the German military. Rescued by Diana, he tells the Amazons of the “War to End All Wars” waging outside their islands. Diana sees this as the work of Ares and leaves with Trevor to Man’s World in order to kill Ares and stop the war.

The film is a brilliantly constructed movie. Patty Jenkins has direct a true epic that the character deserves. At 2 hours and 21 minutes long, it never plods or slows down. The nearly 2 and a half hour run time seems like 90 minutes. There are a lot of characters in the film, but each gets enough time to shine and be shown as unique. There are many instances of foreshadowing, many “Chekov’s Guns” set out that are fired later. This might seem like damning with faint praise, but considering the last time the character was on the big screen, the name “Martha” was a major plot point that came out of nowhere and changed a killer to a friend. Anything Jenkins and the writers did to, you know, have the film be coherent is a plus.

Jenkins balances humor and drama to great effect. She is a master of manipulating the audience’s emotions in the best way possible. There are so many great moments in the film that its really not fair to list them all.

The acting is first rate pretty much top to bottom. And at top s Gal Gadot. My only exposure to Gadot was in the Fast and Furious films, and didn’t give any indication of the caliber of actress she really was. She has to play a naïve waif and a warrior princess almost interchangeably, a difficult contrast that Gadot makes believable.  One of the elements of her character is that she is in awe and wonder by all the new things she is seeing in the man’s world, yet be savvy enough to know many of the world’s languages. This kind of trait usually is annoying in a character because is seldom is pulled off correctly. Gadot nails it. That and so much more. Her performance is truly impressive.

Chris Pine also does well in a well-written role as Steve Trevor. It would have been easy to portray Trevor as a male version of the damsel in distress or an overbearing macho guy who would diminish Wonder Woman’s impact. He is neither. He is a rugged man of action who is sensitive enough to be able to change the 1918 man’s view on gender roles. The film lets him be a hero without ever making Wonder Woman suffer for it. And the reason why it works is Pine’s nuanced performance.

As for the rest of the cast, Danny Huston oozes menace whenever he appears on the screen, and Elena Anaya is creepily brilliant as Doctor Poison. Robin Wright, Connie Nielsen, Said Taghmaoui and Ewen Bremner make great use of their screen time.

The film will inevitably be compared to the Marvel films. It shouldn’t. Marvel and DC are two diametrically different publishing houses. DC’s heroes are larger than life, epic champions who do good not because they are Jesus Christ allegories but rather because they are decent beings who care about the human race. Taking that into consideration, Wonder Woman is the perfect DC Comics film. If Warners keeps the same attention to staying on message with the other films as they did with Wonder Woman, then they have a golden future ahead of them.

Confirming something we already knew, Patty Jenkins will be back to direct WONDER WOMAN 2. [click for more]

The company winning half the rights to Superman yesterday appears to have put this film on the fast track. [click for more]

1. Green Lantern (Warner Brothers, 3,816 Theaters, 105 Minutes, Rated PG-13): Once upon a time, DC Comics held a monopoly on the comic book movie. Between the Superman and Batman franchises, DC was being well [click for more]

Well yeah, but aren’t you angry over the lack of star spangled panties?

My only issue with the movie would be, more Doctor Poison!
Other than that it was damn good-