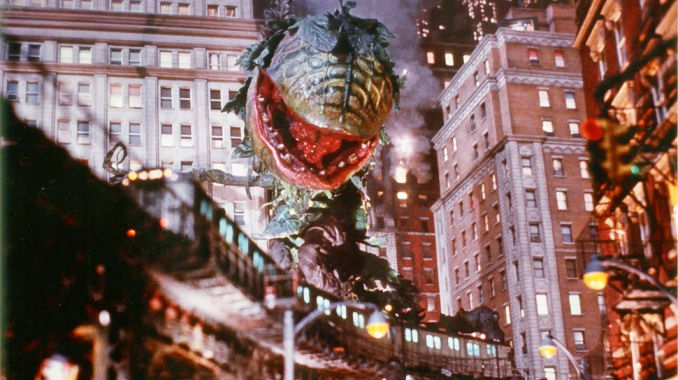 The movie that warned us to don’t deed the plants is coming back to theaters which will mark the first time that its original ending will be seen theatrically.

Fathom Events is presenting Frank Oz’s hilarious big screen adaption of the musical comedy Little Shop Of Horrors on October 29th and 31st with the film’s legendary, original ending that had been cut before the Little Shop‘s original 1986 release.

Filmed at an expense of around $5 million, the approximately 23-minute original ending to Little Shop Of Horrors more faithfully translated and then expanded upon the stage version’s finale. We won’t spoil how things play out, but test audiences may have responded negatively to such a dark finale. Some quick rewrites and reshoots later and the film had the happier ending with which most audiences are familiar.

The original ending briefly appeared on the initial DVD release of Little Shop Of Horror. However, the original elements that were available were from a grainy-looking, black and white work print of the finale, lacking some finished effects, postproduction sound and other tweaks. When the film’s producer David Geffen saw that was the version placed on the release, he blew his stack. Warners responded by quickly recalling the discs off shelves. Promises were made that a better, more complete and in-color version would eventually be added to a new release, but it never materialized until the film’s 2012 blu-ray release.

Little Shop Of Horrors stars Rick Moranis, Ellen Greene, Vincent Gardenia and Steve Martin and features a raft of cameo appearances from some of the mid-1980s’ best comedy and character actors. Last year it was announced that Greg Berlanti was developing a new adaption of the musical with

About Rich Drees 6804 Articles
A film fan since he first saw that Rebel Blockade Runner fleeing the massive Imperial Star Destroyer at the tender age of 8 and a veteran freelance journalist with twenty years experience writing about film and pop culture.

LITTLE SHOP OF HORRORS Blu-ray May Include Original Cut Ending

Today, alternate beginnings and endings of films are a standard feature on DVDs. But that wasn’t always the case. Back in the early days of the format, 1998 specifically, studios were just starting to discover [click for more]

Warner Brothers is bringing that mean, green mother from outer space back to the big screen. [click for more]