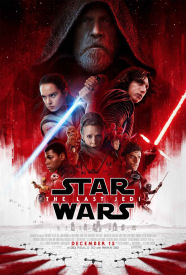 “This is not going  to go the way you think!”

So Luke Skywalker (Mark Hamill) ominously warns young Rey (Daisy Ridley) at one point in the latest Star Wars installment, The Last Jedi. And it could be a warning he is giving to audiences as well, as franchise newcomer writer/director Rian Johnson pushes the franchise in new and unexpected directions.

When JJ Abrams’ The Force Awakens kicked off the current cycle of Star Wars movies we are in in 2015, it was criticized in some quarters for echoing too closely the original 1977 Star Wars film. These people will probably find fault in the way that The Last Jedi similarly parallels the very first Star Wars sequel, The Empire Strikes Back. The film opens with our heroes in the Resistance out-numbered, out-gunned and on the run from the superior forces of the evil First Order. There is a young Jedi hopeful journeying to a Jedi Master reluctant to teach them. We are introduced to new characters, some of which who have veiled loyalties. But Johnson knows these tropes and does things to invert or examine them in ways that play out differently then we have seen before and expect.

Another thing that The Last Jedi does that is similar to Empire Strikes Back in that it splinters its heroes off into separate storylines that dovetail back together in time for the big finish. Sure, we don’t get to see more of the chemistry of the new characters introduced in Force Awakens, but instead Johnson pairs them with off with some of classic Star Wars trilogy characters and explores how they relate to each other. Rey is off with Luke trying to convince him to end his self-exile and return to a position of leadership in the fight for freedom across the galaxy. Resistance pilot Poe Dameron (Oscar Issacs) joins Leia (Carrie Fisher) as the rebels desperately find a place to hide from the First Order. Finn (John Boyega) heads off on his own side mission, though he doesn’t get to pair up with a classic Star Wars character for it.

It is hard to go further into the film’s story without getting into spoiler territory. Suffice it to be said that Johnson as a self-professed life long fan definitely knows his way around the Star Wars universe. His story certainly treats us to moments that excite on a level that we have come to expect from the franchise. He also addresses some things that have been hinted at or mentioned before, pushing the lore of the franchise into new and different territories.

And Johnson’s envelope expanding storytelling also tells to the ways these films are visually told. While based very strongly on the visual aesthetic previously established for the franchise, Johnson manages to do a few things not seen before in a Star Wars films. This film features the first bonafide flashback in the franchise. Previously, the films were very much centered in their subjective present, with any backstory being related strictly through dialogue. Here, Johnson actually showed rather than just told. The director also does an interesting job in actually relating in visual terms how the mystical Force permeates and weaves through the Star Wars universe. On the less metaphysical and more visceral side, Johnson also delivers some stunning, beautiful and exciting images in many of the film’s battle sequences.

The actor and the writer/director will team-up for a new mystery series for the online streaming service. [click for more]

The LAST JEDI co-writer/director will be charting a new trio of STAR WARS tales after the current trilogy wraps. [click for more]