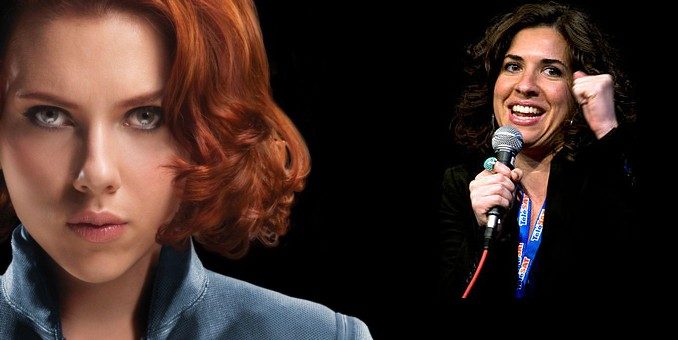 Kevin Feige wants it. Scarlett Johansson wants it. Millions of fans want it. And it looks like we are finally going to get it–a Black Widow film.

The Hollywood Reporter’s Heat Vision blog states that writer/director Jac Schaeffer has been hired to write a script for the film.

Schaeffer first got notice for her debut film, TiMER, in 2009 and the short film, Mr. Stache, in 2011. This got her work as a screenwriter, having wrote the gender-swapped Dirty Rotten Scoundrels remake, Nasty Women, which will be coming out this year and her Blacklised script The Shower, which is currently in active development.

If that part of her resume gives you pause, the next entry will stop you dead in in your tracks. Schaeffer wrote the Olaf’s Frozen Adventure short that ran before Coco, a short so poorly received that when it reached its the end of its limited run people though Disney yanked it because of complaints.

Just because Schaeffer is only known for quirky comedies with a sci-fi bent and the worst thing Disney put in theaters in years doesn’t mean that her Black Widow script will be bad…or even used.

No word on a release date for the film, but one assumes that it will be part of Phase Four and come after the currently scheduled Marvel Studios films run their course.

Dissecting The New THE AVENGERS Poster

Noah Baumbach plumbs emotional depth with Adam Driver and Scarlett Johansson in this story of the unraveling of a marriage. [click for more]

STATE OF THE COMIC BOOK FILM 2020: The Heroes’ Toughest Foe Yet–The Curse of the Pandemic

There were comic book films this year, but only slightly more than half that were planned thanks to the pandemic. [click for more]