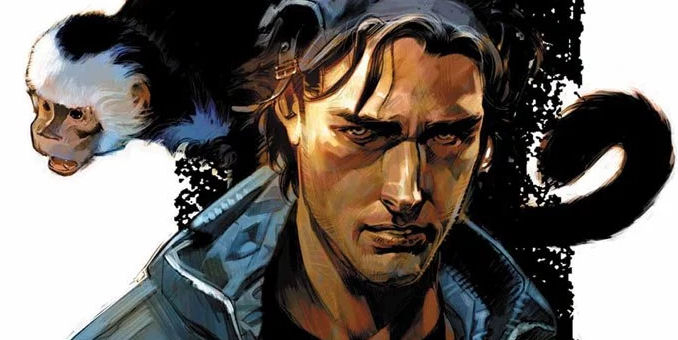 Cable outlet FX has given a series order for Y, an adaptation of the acclaimed DC Comics/Vertigo series Y: The Last Man, it was announced today.

Created by writer Brian K. Vaughan and artist Pia Guerra, the series told the story of the world after a plague wipes out all but one male human, Yorick Brown, while sparing all of the females. Over the course of the book’s sixty-issue run, Yorick traveled across the country with his pet monkey looking for his girlfriend and for the cause of the mysterious plague. The book used it’s post-apocalyptic setting to explore issues of gender, race and class. The individual comic issues were also collected into a series of trade paperbacks, the final volume of which was the first graphic novel to win the new instituted Best Graphic Story category at the 2009 Hugo Awards.

The project had been in development at FX for some time, but only recently gained traction when writer Michael Green exited American Gods and was able to focus on this. Green, along with Aïda Mashaka Croal (Luke Cage), will serve as executive producers and showrunners on the series. Before FX expressed interest in the project it had been in development as a feature film.

Y is expected to premier sometime in 2020.

About Rich Drees 7034 Articles
A film fan since he first saw that Rebel Blockade Runner fleeing the massive Imperial Star Destroyer at the tender age of 8 and a veteran freelance journalist with twenty-five years experience writing about film and pop culture. He is a member of the Philadelphia Film Critics Circle.

The live action adaptation of the critically acclaimed comic has gotten the axe before its first season has even finished airing. [click for more]

New Line Meeting With Directors For Y: THE LAST MAN

The comic adaptation is back to being a priority for the studio. [click for more]