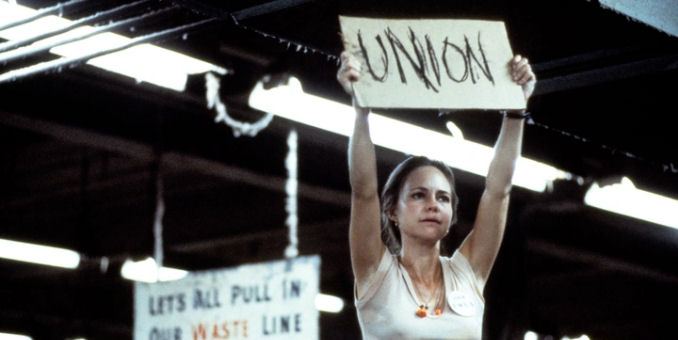 Yesterday, February 10, marked the beginning of formal negotiations between the Directors Guild of America and the Alliance of Motion Picture and Television Producers over the renewal of the standard basic agreements for payment for initial directorial work and subsequent residual payments once that work enters into additional revenue streams, i.e. home video sales, etc., for the studio. This is just the beginning of a cycle of negotiations that will see not just the DGA but the Writers Guild of America and the Screen Actors Guild all enter into talks with AMPTP, as the agreements between the producers and the guilds are all coming to end within a two-month period. And if what we have already seen is any indication, the chances that these talks will break down, leading to a strikes from one or more of the guilds, feels like a distinct possibility.

At the heart of all three guilds’ concerns is how the exhibition and distribution landscape has changed thanks to the rise of streaming and how these changes have impacted the residual payments for their members. Traditionally, a creator would get their initial payment for their work on a film or television project, and then if that show or movie would move on to ancillary markets like syndicated reruns for TV or being sold for TV broadcast for a movie, additional residual payments would be generated. For a long time, home video sales – starting with VHS in the 1980s through DVDs and then ultimately blu-ray – generated nice payments for all involved. But only after the guilds had to fight for their share of that pie in previous contract re-negotiations.

But that model of distribution and royalty generation has changed in many ways since the last agreement was put into place. It is true that there has never been more scripted television series currently being made than right now during this period of peak television. However, a majority of those shows are on streaming services like Netflix , Hulu and Amazon, which traditionally order a lower number of episodes per season than a traditional network season order. As such, there is less initial income for those working away in the writers room or on set in front of and behind the camera.

Additionally, most of this abundance of new shows are designed to live solely within the ecosphere of the streaming service they are being produced for. They do not have secondary lives being rerun elsewhere or being available on home video. Netflix and Amazon want you to come to them for the shows you want to see, not pay once for a blu-ray box set that you can then rewatch as much as you like. And this new business model effectively has closed off those royalty streams for actors, writers and directors.

Indeed, this start of formal talks for the DGA comes about two months after the usual time that such negotiations begin between the guild and AMPTP, a sign that many are considering worrying. And since the WGA and SAG often take their cues from the DGA in terms of what to negotiate for, if AMPTP reaches an impasse with the DGA, they could conceivably reach the same stalling point with the other two guilds.

Traditionally in these contract negotiation years, the DGA goes first with the WGA and SAG following their lead in terms of what the directors are able to secure for themselves. But there are factors in play that potentially change the landscape this time around.

The current Directors Guild agreement ends on June 30, the same date as the Screen Actors Guild agreement does. The Writers Guild contract expires a bit earlier on May 1. No negotiation dates have been announced for either the WGA or SAG, though late last week WGA members overwhelming approved the Guild’s proposed “Pattern of Demands” for the upcoming talks.

The Writers Guild is already feeling their muscles fresh off of last year’s fight with the major talent agencies over the issue of packaging fees and other practices that saw the agents, who are supposed to be working on the writers’ behalf, earning more money than the writers themselves. In the course of things, some 7,000 WGA members fired their agents and only now some midlevel agencies are coming around to sign the guild’s new code of conduct that curbs many of the practices that were costing the writers earnings.

The WGA’s confidence going into 2020 negotiations can perhaps be best summed up in the words of WGA, West president David Goodman when speaking last weekend at the Guild’s awards ceremony, “We’re going into negotiations from a very strong position.”

Although it includes similar residuals concerns that the DGA has, within the WGA’s “Pattern of Demands” plan are a number of points that are writer specific. One of them calls for the studios to only work with Guild-approved agencies, effectively moving last summer’s turf war with the agents to a new venue. And even if the WGA comes to terms with AMPTP over the same issues that the DGA and SAG are in talks with them over, the agency issue could still be a sticking point that the WGA might not budge on. 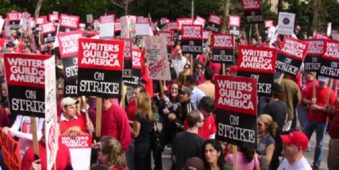 Studios and networks were stung hard during the 2007-2008 writers’ strike. Many films – including the James Bond franchise installment Quantum Of Solace – were put into production that could have used additional script work before cameras rolled. Nearly every network series of the 2007-2008 season wound up being cut short. When many freshman shows from that season returned the following fall, they were unable to retain their pre-strike audience and wound up being cancelled due to low ratings.

Additionally, when all was said and done, the 100-day work stoppage was estimated to have cost the economy of Los Angeles somewhere in the vicinity of $2.5 billion.

Therefore, in anticipation of strike action from at least the WGA, the Hollywood ReporterHollywood Reporter is stating that producers and studios around town are beginning to stockpile scripts in anticipation of a writer’s strike in May after their current agreement expires. Some producers are already looking at forgoing between-season breaks and driving their writers rooms right into work on the next batch of episodes in order to have material on hand to film if writers walk off the job this summer. This is most likely the reason that the CW gave early renewals to nearly its entire primetime lineup early last month. Other networks are giving direct-to-series orders for series that they had in development, like CBS’s Silence Of The Lambs sequel Clarice. Many outlets are also reportedly looking at acquiring more reality and foreign-originating programming as a way strike-proofing their broadcast lineup.

How the Screen Actors Guild is going to respond to their own negotiations with AMPTP is harder to gauge. The last time they went on strike was in 2000 but that was only in regards to basic minimum rates and residuals for commercials. SAG has been known to support other unions during their work stoppages. In 1978 and again in 1980, they linked arms with the American Federation of Radio and Television Artists as they struck. In 1960, SAG joined the WGA on strike against the seven major studios of the time when their concerns over the exploding business of television production overlapped. While current SAG contracts with the AMPTP specifically forbid a general strike in support of another guild’s strike, numerous members walked picket lines in solidarity with writers during the WGA’s 2007-2008 action including the likes of Ron Howard, David Duchovny and Mel Gibson.

But if both the DGA and WGA both find themselves facing off against the AMPTP over terms for the new agreement, I would not be surprised if SAG membership also walked out to picket lines with similar concerns over residuals.

Of course, no strike, let alone a perfect storm convergence of all three guilds walking the picket lines simultaneously, is an absolute certainty. As Goodman stated at the WGA Awards “It is ludicrous to think that we’ve already decided to go on strike without negotiations even happening.” Although he did add that it was “dangerously naive to think a strike is never necessary.”

Of course, it would seem that the best solution here would be to institute a new royalty structure that would generate payments for the creatives involved based on the number of times a show like Amazon’s The Marvelous Mrs. Maisel or Netflix’s Glow gets watched and rewatched. However, to put something like that into effect would require streaming services to be far more transparent with their viewing figures than they have been wont to be so far. Hiding that viewership data is in the streamers best interest, and not just so they wouldn’t have to pay out royalties on popular shows. That lack of transparency also gives them an upper hand when it comes to negotiating the purchase of series for their services. It is a tight grip that they might not be so eager to loosen and could lead to the likes of Amazon and Hulu to lean on AMPTP. And how that will play out is anybody’s guess.

What the SAG Awards Means For The Oscar Race

Does a win at the Screen Actors Guild Award clinch the deal for an Academy Award? Statistically, yes. So here’s what that means for the Oscars race. [click for more]

How many of these films have you seen? [click for more]

The WGA has grave concerns about the merger of the two entertainment companies, as do members of Congress. [click for more]