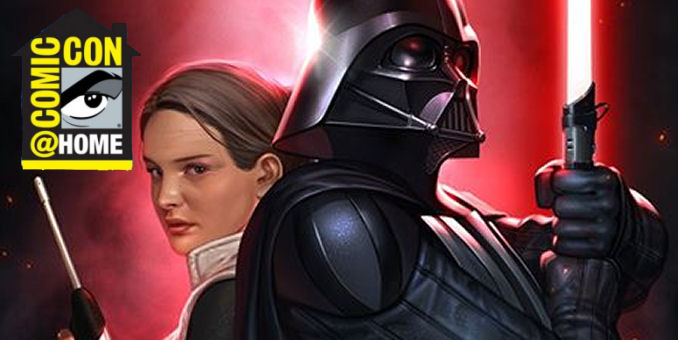 During today’s “Lucasfilm Publishing: Stories From A Galaxy Far, Far Away” panel at Comic-Con@Home, which featured a spotlight on upcoming literary adventures in the Star Wars galaxy, writer Greg Pak spoke a bit about what is driving his latest volume of the Darth Vader comic and made mention that the story will surprisingly connect to another part of the Star Wars saga.

“I’ll just say that at the end of our first arc, Vader claims to have settled all of his previous business,” Pak states. “But the Emperor knows better. Vader is going to suffer a terrible punishment and undertake a new journey/quest and there are key elements that will tie into Episode 9 in a huge way.”

Pak offered no additional details, but the inference here suggests that the storyline could be addressing the way Emperor Palpatine was surprisingly resurrected for the final film in the Skywalker Saga.

As the panel noted that this year marks the 40th anniversary of the release of The Empire Strikes Back, Darth Vader comic book writer Greg Pak took the moment to explain how that film’s most iconic moment served as the starting point for the most recent volmue of the comic book series.

It’s probably the best known moment in the whole storyline – Luke gets his hand lopped off, Darth Vader is father, etc., etc. But we tend to think of that from Luke’s point of view as Luke is our main character, right? But when you dig into that you realize that Vader himself is as traumatized as Luke is in that moment. And that moment is echoed purposefully throughout the series, like when Vader being rejected by Luke is a direct parallel to when a younger Anakin on Mustafar being rejected by Padme. There are all these moments in time when Vader reaches out to somebody in his family or someone he is deeply connected to and then is rejected or looses that person in some way or another.

It was tremendous to be told “This is the moment, do you want to explore it?” and so what we’re doing is exploring Vader’s immediate reaction and the aftermath of this rejection. The number of doors that have been thrown open for us to walk Vader through have been astounding. We have not only been able to dig into Vader’s own psyche, we have also been able to dig into the past and bring back some very surprising characters. One very surprising character in particular from the prequels. This is the kind of story I love the most – is being able to this crazy fantastical stuff but then combine it with as deep an emotional story as you can do.

Pak also noted that E. K. Johnson’s two Star Wars novels, Queen’s Shadow and the recently released Queen’s Peril, which explored the world of the prequel’s Queen Padme Amidala and her retinue of handmaids who also serve as doubles and bodyguards.

The comic’s first story arc is just resuming and the next issue goes on sale next Wednesday, July 29, following the recent coronavirus-fueled comics publishing hiatus from this past spring. Pak was circumspect about how things may play out in the story, but he did drop a fairly big reveal for the book’s second story arc.

About Rich Drees 6622 Articles
A film fan since he first saw that Rebel Blockade Runner fleeing the massive Imperial Star Destroyer at the tender age of 8 and a veteran freelance journalist with twenty years experience writing about film and pop culture.

The first casting announcement for the upcoming film. [click for more]

The rumor reportage is missing some critical information. [click for more]

After a three-tear break, we will be able to return to a galaxy far, far away in our theaters in 2022. [click for more]