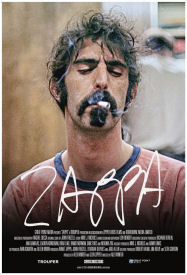 Frank Zappa didn’t defy categorization as much as he strived to shatter the idea of categories. Although often regarded as a rock musician and virtuoso guitar player, Zappa strove to push the boundaries of 20th century contemporary composition in new ways that often challenged his audiences. He brought the idea of the avant garde to rock and roll, melding them into a style that was uniquely his own, a sound that alienated some listeners almost as much as it captivated others.

Alex Winter’s latest documentary, Zappa, attempts to peel back the layers of that surround the musician and composer, getting to the core of the man. And it does a remarkable good hob of it. Winter goes all the way back to Zappa’s childhood in Baltimore where for fun he would splice 8mm footage from 1950s science-fiction films into his parents’ wedding home movies. A family move to California brought the teenage Zappa to that fateful day when a negative newspaper review drove him to purchaser a record by experimental French-born composer Edgard Varèse. He may have played in some rock and rhythm and blues bands in high school, but he was already setting his sights on something bigger. A trumped up pornography bust as he was struggling to open his own recording studio was the spark that flamed into his famous anti-authoritarian streak. Forming his first band, the Mothers of invention, in his early 1920s, they decamped from the Los Angeles suburbs for New York’s Greenwich Village, where a six-month residency became the foundation for what would follow.

Winter hits all the major highlights of Zappa’s life- the breakup of the Mothers, his continuation as a solo musician. his split with Warner brothers records and his launch of his own independent label in order to insure that what he created stayed pure. Mainstream, commercial success never seemed to be Zappa’s primary goal. He seemed to be self-sabotaging his 1978 guest host appearance on Saturday Night Live and the fact that his 1982 song “Valley Girl,” recorded with his teenage daughter Moon Unit Zappa, became a hit most likely surprised him more than anyone else. Zappa’s more avant garde work is examined and shown how outside of the United States it opened up new audiences who appreciated him for his more complex compositions and not just the more mainstream, sarcastic and snide rock and roll stuff.

For Frank Zappa devotees – and I count myself as at least a casual fan who was lucky enough to see him perform in March 1988 on his last tour just a few weeks before his road band imploded- much of this biographical information about the musician presented may not be new. Most of it was previously covered in the musician’s 1989 autobiography, The Real Frank Zappa Book. But that is told all from Frank’s own viewpoint.

What Zappa the documentary adds, through interviews with a number of musicians and other artists who worked close with Zappa over the years, is a depth that one doesn’t get from just an autobiographical piece. Frank may have thought about himself and his work in one way, but the people who he associated and interacted with have their own opinions and the film doesn’t shy away from them. Longtime musical associates percussionists Ruth Underwood and guitarist Steve Vai both talk about Zappa’s demanding nature when it came to their performances for him. But Zappa didn’t drive anyone harder than he drove himself to get the music he heard in his head out into the world. As Vai observes, “Frank was a slave to his inner ear.” They admit to knowing that they weren’t really collaborating with Zappa as one might in another band. They were working to bring Frank’s musical visions to life, not their own.

Within the film’s 128-minute runtime, Winter does manage to build a reasonable complex and mostly complete portrait of Frank Zappa the man and artist. But even at that, there are some curious omissions. Zappa’s children only get the briefest of mentions outside the contribution that Moon played in the creation “Valley Girl.” None of them even appear for on-camera interviews. Curious too, is the staging of Zappa as the only person speaking out against the Parental Music Resource Center during the Congressional hearings about adding content warnings to rock music albums in the 1980s. Zappa was one of a number of music industry professionals who spoke knowledgably at those hearings, memorably ranging from country star John Denver to Dee Snider of the glam metal band Twisted Sister.

One of the real draws here is the treasure trove of footage and audio from Zappa’s own, extensive archive. Zappa incessantly had some sort of recording device in operation almost continuously, either audio or video. After securing the cooperation of the Zappa family – although there was reportedly some dissention about the project initially amongst the children – Winter and his crew spent two years restoring and cataloging all of the film and audio in the Zappa vault, often contending with a variety of different formats in the process. All of this footage helps give the documentary a step up over many similar projects of this type, offering us glimpses of Zappa and the various incarnations of his backing band over the year as well as the composer in more unguarded moments while writing and recording.

As a fan, I perhaps would have liked to spend more time with the various concert recordings seen throughout the film. But given that much of his material has been fully restored, we will hopefully see some of these concert films released in their full form in the future. 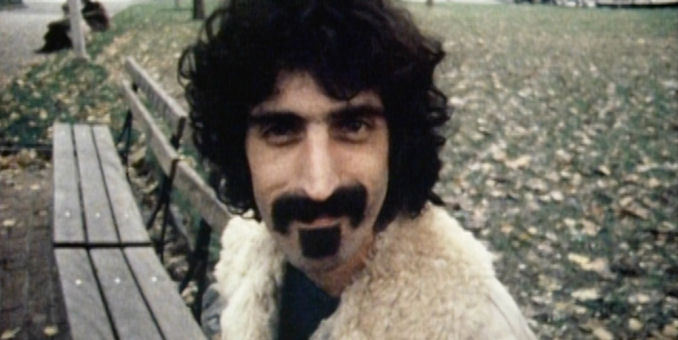 The debut feature from writer/director Quinn Armstrong takes an offbeat story conceit to strange and exciting places. [click for more]

Philadelphia Film Festival ’20: MY ZOE – A Great First Half Undone By Second Half

Actros/writer/director Julie Delpy’s latest fires on all cylinders until it implodes under the improbability of its second half. [click for more]

There Is A Completed BILL AND TED 3 Script! Excellent!

And Alex Winter is reading it! [click for more]