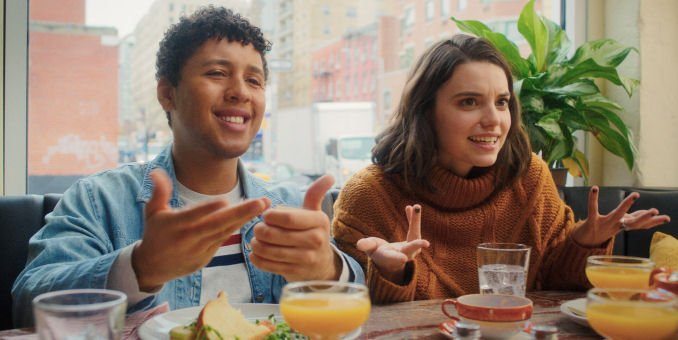 With a number of movies at the Tribeca Film Festival injecting the reality of COVID into their storylines, director Jonah Feingold’s Dating & New York almost feels like a throwback to a pre-pandemic time. And that is before one gets the feeling that this film is nothing if not a riff on Rob Reiner’s When Harry Met Sally re-imagined for the Millennial, dating app generation. And ultimately, it is a comparison that does not do the newer film any favors.

New York twenty-somethings Milo (Jaboukie Young-White) and Wendy (Francesca Reale) meet via a dating app. While they like each other enough to sleep with each other on that first date, they both realize that they want different things out of a relationship, so they go their separate ways. Two months, and a string of bad dates, later, Wendy reaches out to Milo with a proposition – a friends with benefits relationship that would allow them to hang out and sleep together, but with a contractual promise of no deeper emotional entanglements.

Well, as a Gen-Xer who has seen Can’t Buy Me Love a number of times, I know that this isn’t going to work out well at all. And it seems as if everyone around them knows that it won’t work out they way they are planning also. Milo definitely wants to be more than just friends with benefits, but Wendy is determined to stay free, even though it means a string of rather bad first dates. What follows is some standard rom-com beats before the well telegraphed happy ending.

To be fair, there are a number of elements that work in this film. The two leads do have a breezy charm about them. The relationship that Milo and Wendy’s best friends Jessie (Catherine Cohen) and Hank (Brian Muller) find themselves in works as a nice yard stick to measure where our lead couple is in terms of their own relationship. And for a smaller budgeted indie, Feingold uses just enough familiar New York locales, such as Central Park’s Bethesda Terrace, to sell much of the other, more nondescript locations that make up the balance of the film.

The overall feeling of mild neuroticism about relationships feels natural in a New York setting, thanks in part to decades of Woody Allen mining the same locational angst. Some of the more surreal moments of humor – like when Wendy begins psychoanalyzing a date while walking home to the point where we see him on a therapist’s couch in the middle of the sidewalk or her impromptu press conference following another disastrous first date- also feel Allen-esque. As does the Woody Allen-Diane Keaton vibe much of the banter between Milo and Wendy radiates.

But tonally, the film is a bit of a mishmash. The film opens and closes with some painted title cards and ethereal theme music which look lifted right out of a Disney from the 1950s. Is it an attempt to frame the film as a modern day fairy tale or is it a comment on the Disnefication of the city? Neither option is supported by the story itself. There are several moments where the film feels self-referential, but it never takes that further and offers any comment on the genre. Ultimately, much like its two leads, Dating & New York is kind of charming, but doesn’t really know what it wants to say.

Tribeca ’21: INDIA SWEET AND SPICES A Familiar Taste With A Spicy Twist

A dramedy that is simultaneously universal and specific to the Indian American immigrant experience. [click for more]

A look at the controversies surrounding the first new Leonardo da Vinci painting to be discovered in over a century. [click for more]

Tribeca ’21: THE NEUTRAL GROUND A Wry Look At A Controversial Topic

A wry look at the controversy surrounding the removal of Confederate memorial statues in the south. [click for more]