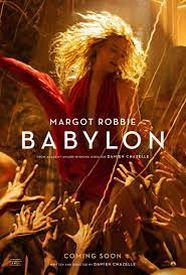 Babylon, the new film from writer/director Damieon Chazelle, is a huge, sprawling, glorious mess of a film. While it does reach occasional heights of greatness, it is not an overly great film. But not for lack of trying. Chazelle is operating full throttle here, but there are times when the film just seems to escape his control momentarily before he manages to lurch the wheel and steer it back on course. But despite that, the spectacle frequently on display still marks it as a film worth seeing on a big screen, despite its flaws. It is a movie about movies and as Chazelle shot it, it demands to be seen in a movie theater.

The film’s opening set-piece is a wild, debaucherous party in early 1920s silent film-era Hollywood. It is a scene out of the worst nightmares of the moral crusaders of the time who decried the somewhat isolated film colony as a den of drugs, alcohol, sex, jazz music and other assorted depravities. And this party has all of that and then some. Chazelle’s camera sweeps through the mansion packed full of sweaty humanity in long, sweeping uninterrupted shots, taking all the wild hedonism in. Is this virtuoso film-making, indulgent in the way that the characters it is chronicling are behaving or is it just plain self-indulgent on Chazelle’s part?

At this party we meet the main players of this cautionary tale. There is Jack Conrad (Brad Pitt), the charming silent film star who isn’t really bothered by his inability to keep a wife. Party crashing Nellie LaRoy (Margot Robie) is a hard-partying girl from New Jersey, eager to make her way into the film industry, while Mexican immigrant Manny (Diego Calva) is just looking for any way to make a better life for himself in California. But as the times change about them, the three find themselves unable to adapt to that progress. While Jack has a great face for silent films, he is not much of an actor when it comes to using his voice. Nellie finds the technical demands of sound filming to be too much for her more freewheeling, spontaneous acting style. Manny climbs the ladder from production assistant to studio executive, but finds that all that he has worked for could be endangered by his unrequited love for Nellie.

The title of the film here recalls Kenneth Anger’s infamous tome Hollywood Babylon, and appropriately, Chazelle’s film is about as historically accurate as Anger’s book. That is to say, not really all that much at all. The main characters are all fictitious. The closest any character gets to having an historical analogue is Li Jun Li as Lady Fay Zhu, who seems closely modeled on silent film star Anna Mae Wong. (A few actual Tinsel Town figures such as studio exec Irving Thalberg and newspaper magnate William Randolph Hearst and his mistress, actress Marion Davies do pop up briefly.) But their circumstances certainly are drawn from the general historical course of Hollywood’s transition from silent pictures to the early talkies.

Chazelle clearly loves this period and he and his team recreate it in loving and meticulous detail. The first hour is exceptional vibrant in its recreation of lavish Hollywood parties and the filming of a silent historic epic with a literal cast of hundreds. But lost in all that detail is any solid connection between the characters. Sure their storylines will occasionally bounce off of each other, but there is no stronger connection between them. As such, it makes the film feel very diffuse, especially after its first third is over and the characters’ journeys take them further afield of each other.

If you’re thinking that this story is basically Stanley Donen’s Singin’ In The Rain by way of Paul Thomas Anderson’s Boogie Nights, you would not be far off. In fact Chazelle even references Donnen’s film at the end of his own movie in a way that reinforces his theme that the work done by the early film making pioneers will live on long after they have all died. But, in the way that Hollywood also uses up people for its own purposes, these early pioneers whose fictionalized story we have just spent three hours and some minutes with, has been sanitized and monetized, turned into a cheery musical with all the actual jagged edges well and truly polished down.

And that’s where Chazelle gets his message muddled. If he is criticizing Hollywood for turning actual struggle into heartwarming fodder, why is this immediately followed by a montage that suggests a love for Hollywood film-making and its output? Or is it just that loving the movies can sometimes feel like a confusing pasttime as we the audience work to reconcile the realities of the tumultuous lives of its actors and artists with the idealized dreams they put onto the silver screen?

Is there any credence to the rumors that Warner Brothers is planning multiple Batman-related films to celebrate the character’s 80th anniversary? [click for more]

FIRST MAN Takes Us On A Personal Voyage To The Moon

It was a great leap for mankind, but Damien Chazelle’s film follows the man who made that first small step… [click for more]

“The banks have more incentives than greed.”
“You’re wrong.” [click for more]