In a cinema landscape overrun with in your face comedies like Adam Sandler’s Anger Management, the latest mockumentary from Christopher Guest, A Mighty Wind, is, if you’ll excuse the obvious metaphor here, a breath of fresh air.

The story here is fairly simple. Following the death of an influential folk music promoter, three of his most famous acts reunite to perform a tribute concert. Each band is riff on various bands from the original 60s folk era. The New Main Street Singers (fronted by John Michael Higgins, Jane Lynch and Parker Posey) with their vapid, vanilla arrangements are a solid slam against such groups like the New Christie Minstrels. Eugene Levy and Catherine O’Hara are folk’s former favorite sweethearts Mitch and Mickey. Director Guest reunites with his Spinal Tap musical cohorts Michael McKean and Harry Shearer, trading in their electric guitars for banjos and mandolins, to portray The Folksmen, a band in the tradition of The Kingston Trio and the like.

What’s great about this film is that Guest and his ensemble have remembered that subtle can be funny too. The laughs here are not derived from broad slapstick or flying body fluids. Instead a joke can be driven home by something as simple as a wink or a pause.

The movie is a celebration of outrageous characters and even the ones who don’t get much screen time, like Ed Begley Junior’s Yiddish talking public television executive, are still well-rounded comic creations. Jennifer Coolidge, decked out in a fake tan and gravity defying décolletage as PR flak Larry Miller’s amazingly vapid assistant, maybe has five minutes total of screen time but her line about trains is the single funniest gag in the film. Guest has assembled a great repertory company of players for his films. Unfortunately, the nature of the way that the films are put together means that some of these actors may get short shrift in the final product. On the upside though, it generally means that the deleted scenes that show up on the DVDs for his films are actually worth watching more than once. 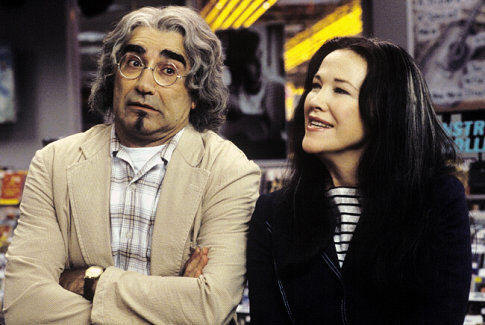 Fans of Guest, McKean and Shearer’s previous satirical musical incarnation Spinal Tap may be a little disappointed that those three are not the focus of the film. The movie is stolen by Levy and O’Hara as the Ian and Sylvia inspired duo Mitch and Mickey. In the 60s, the pair was the sweethearts of the folk scene until their surprising breakup after which Mitch fell down a steep slope of despair and depression. Their reunion 30 years later forms the surprisingly sweet emotional core of the movie.

If the movie stumbles anywhere, it’s during the “Six months later” coda, which have become de rigueur for all of Guest’s mockumentaries. While in previous films these epilogues help wrap up some storylines, two of the three storylines are severely undercut for the sake of a joke. Fortunately, though, this is the only sour note in the whole film.

About Rich Drees 6622 Articles
A film fan since he first saw that Rebel Blockade Runner fleeing the massive Imperial Star Destroyer at the tender age of 8 and a veteran freelance journalist with twenty years experience writing about film and pop culture.
Subscribe