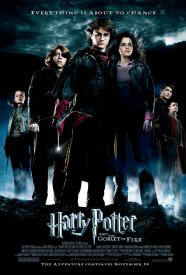 There almost seems little point in reviewing a Harry Potter film. The countless faithful fans of the book series turned film franchise about a gifted student wizard ensure that the films will endanger, if not outright break, box office records. But the question remains, how will the film play for those moviegoers not gripped by Potter-mania?

Young, 14-7ear-old, wizard-in-training Harry Potter (Daniel Radcliffe) and his friends Ron (Rupert Grint) and Hermione (Emma Watson) have entered their fourth year at the Hogwarts School of Witchcraft and Wizardry. The students are abuzz with excitement as Hogwarts has been chosen to host the TriWizard Tournament, a contest from which all but the oldest students are forbidden from entering due to its dangerousness. Entrants are chosen at random from the titular Goblet of Fire, and no one is more surprised than Harry when his named is chosen by the Goblet to participate. As the tournament progresses, Harry soon discovers that the contest’s challenges are more dangerous than even his teachers anticipated and he soon begins to suspect he may be being drawn into a trap set by the evil Voldemort, the wizard who murdered Harry’s parents when he was a baby.

Directorially, the latest entrant in the Potter franchise is a bit of a step back. Where the first two installments of the series, as directed by Christopher Columbus, were fairly stiff, reverential affairs, the third film, Prisoner of Azkaban, pulsed with a life of its own, courtesy of director Alfonso Cuaron. Unfortunately, Cuaron is not around for this installment, leaving us with Mike Newel, who manages to hit a middle ground between the two previous directors. While Newell brings some visual flair to the material, the story itself is a bit of a let down. After Harry had spent so much of the last film in a pro-active role, trying to define himself on his own terms and not based on his teachers’ remembrances of his deceased parents, he spends much of Goblet Of Fire being manipulated and battered about by the plot and not doing much in response. His passive, reactive nature in the film feels like a regression from the character development of the previous picture and becomes more frustrating to watch as the film unspools.

This latest entry in the series further expands the magical world underlying the mundane world that Harry has found himself thrust into over the past few years of his life. Scenes of a Quidditch World Championship reveal that there are more wizards in the world than previously hinted at in the series, while the introduction of foreign magic schools help create an international flavor to Harry’s adventures. Unfortunately, such a broadening of scope threatens to diminish the import of the main characters, especially those of Ron and Herminie, whose roles feel significantly reduced here. A subplot dealing with Ron’s hurt feelings over Harry’s participation in the wizard tournament is given only perfunctory attention, making its resolution near the end of the film almost seem an afterthought. More attention to this could have given the film some much needed dramatic weight.

About Rich Drees 6950 Articles
A film fan since he first saw that Rebel Blockade Runner fleeing the massive Imperial Star Destroyer at the tender age of 8 and a veteran freelance journalist with twenty years experience writing about film and pop culture. He is a member of the Philadelphia Film Critics Circle.
Subscribe