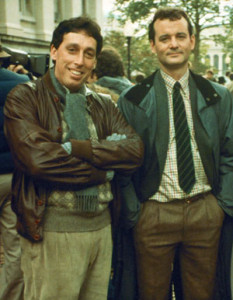 When you need a producer for your Ghostbusters sequel, who you gonna call?

Ivan Reitman, of course. Bloody Disgusting has confirmed that the Ghostbusters/ Ghostbusters II director and producer is attached to produce the in development sequel but hasn’t decided whether he wants to direct or not. They also confirm that the script, written by The Office/Year One writers Gene Stupnitski and Lee Eisenberg, has Bill Murray, Dan Aykroyd, Harold Ramis and Ernie Hudson reopening their paranormal removal business after it had been shuttered for several years.

If Reitman does slide into the director’s chair for this, let’s hope that it will restore his creative energies. His last couple of films – Six Days Seven Nights (1998), Evolution (2001) and My Super Ex-Girldfirend (2006) – really weren’t all that great. And it is a bit disheartening to see the director of Ghostbusters, Stripes and Dave to be so off his game in recent years.

About Rich Drees 6777 Articles
A film fan since he first saw that Rebel Blockade Runner fleeing the massive Imperial Star Destroyer at the tender age of 8 and a veteran freelance journalist with twenty years experience writing about film and pop culture.

The son of original GHOSTBUSTERS director Ivan Reitman will be directing a new story set in the franchise’s original universe. [click for more]

We’re Back To A Murray-Less GHOSTBUSTERS 3

Aykroyd once again vowing to move forward on sequel without Murray. [click for more]

The legendary writer, director and actor died this morning as a result of a rare disease. [click for more]