No one ever said living as a middle-aged adult was easy. There is the constant state of worry about job stability, Social Security, maintaining the ‘excess around the middle,’ irritable mood-swings, being upstaged by a younger super-villain… wai-, what? Hmm, maybe not that last one; but then most middle-aged adults aren’t Gru.

You see, Gru (Steve Carrell) would really like to be the world’s most nefarious super-villain but his efforts have been less than favorable. Sure, he may have successfully stolen a Times Square JumboTron and the Statue of Liberty (no, the other one), but he has little to show for it. To add insult to injury, he’s just found out that one of the ancient Egyptian pyramids has been swiped, and he had absolutely nothing to do with it. Gru’s been outclassed by the new “younger” villain on the block, Vector (Jason Segel). Under these circumstances, a typical middle-ager would probably hang it up and start looking for a new line of work. But not Gru. He’s not ready to let go of the night-vision goggles and blowtorch that easily. Nope, Gru’s got one more diabolical plan up his sleeve and oh, it’s a doozy. He’s going to steal the MOON!

To get the job done right, he’s got to steal a shrink ray with the help of his bumbling old assistant Dr. Nefario (Russell Brand, in a well-disguised voice) who’s hard of hearing, and tends to invent some less than menacing weapons. That plan was easy, but then he loses the ray to his nemesis. How can Gru get it back? He’s going to exploit innocent children for his personal good! Three sweet, adorable cookie sellers will do the trick. Of course, there’s a catch: these three girls – Margo (Miranda Cosgrove), Edith (Dana Gaier) and the uber-cute, fuzzy unicorn loving Agnes (Elsie Fisher) – are orphans. For the plan to work, Gru must adopt the kiddies, get the shrink ray back from Vector and then, steal the moon – all without losing his dastardly façade and becoming a respectable father figure. 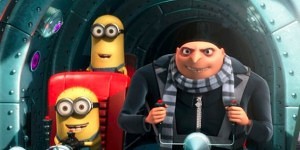 Though in scope and context, it might not exactly match up to Pixar standards, Despicable Me does well as a reputable first attempt from Universal’s fledgling computer animation department. The script is thankfully devoid of overused pop-culture references and toilet humor (well, there is that one joke), instead relying on well-placed comedic timing while offering much of its humor visually. Co-directors Pierre Coffin and Chris Renaud emphasize much of that with Gru’s “minions”. They’re little yellow pill-shaped fellas who do the hard work of carrying out Gru’s plans, and offer plenty of opportunity for laughs. However, there are extensive beats in which not a word is spoken and laughs are unfettered with the simple act of a popped balloon or a sloppily executed act of sabotage. Craftily laden with daft, yet silent cat and mouse games, Despicable Me even invokes the smart slapstick hilarity of old Mad magazine Spy vs. Spy strips. The directors also created a smart laughable contrast of old vs. new, from Gru’s blackened Addam’s Family-esque house and his cumbersome stainless steel vehicles, to Vector’s space-age villain lair and his fancy, sleek jet-set styled machines.

If so much is pleasantly happening visually, why then did the animators resort to presenting Gru’s adventures in 3D? The heavily relied upon stunt adds more depth and texture to the film. From the gimmicky first-person POV rollercoaster ride to the vastness of Gru’s underground lair, the use of 3D is precise, never showy. True 3D aficionados may want to stick around during the credits for some hilarious play on the novelty.

As a middle aged adult, this reviewer tends to get cranky with the burgeoning amount of sloppily laid-out animated stories. On the contrary, this movie is pleasingly off-kilter. Amidst the entire smart, if not whimsical visual play, Despicable Me possesses a lovable conscience, revealing that even a cold, dastardly super-villainous, middle-aged heart can grow warm if given the right conditions.

Only Three To Race For Animated Feature Oscar

When the Academy Award nominations are announced on January 25, there will only be three films competing for votes in the Best Animated Feature Film category. The Academy of Motion Picture Arts and Sciences announced [click for more]

1. Despicable Me (Universal, 3, 474 Theaters, 95 Minutes, Rated PG): For the longest time, I had no idea what this film was about. Every poster I saw had those minion things on it and [click for more]