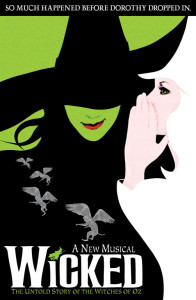 A couple of weeks back, we told you about nine separate film projects based on L. Frank Baum’s classic Oz fantasy novels. Amid all the faithful adaptations, post-modern re-tellings, revisionist sequels and prequels was the film adaptation of the hit Broadway musical Wicked, itself an adaptation of Gregory Maguire’s post-modern prequel novel of the same name.

Back in December 2008, Kristen Chenoweth, who was nominated for a Best Actress in a Musical Tony Award for originating the role of Glinda the Good Witch in the show, was of the opinion that the producers would probably wait until they had just about wrung every possible cent out of the live show before committing to a cinematic version. Well, even after grossing over $2 billion in world-wide ticket sales, the Broadway show is still playing to packed houses and there are several productions currently being staged in Chicago, London, Japan and Germany and touring companies traveling the globe. But it looks like that film version is going ahead now rather than later.

Deadline is reporting that show’s musical’s producer Marc Platt, book writer Winnie Holzman, and songwriter Stephen Schwartz have begun meeting with potential directors for a film adaptation. Among those in contention or having thrown their hat in to the ring are JJ Abrams, James Mangold, Ryan Murphy, and Rob Marshall.

That’s an intriguing list of names, especially since neither Abrams nor Mangold have directed a straight out musical, though Magold did helm the Johnny Cash bio-pic Walk The Line. Although Murphy is one of the creative forces behind the hit musical TV series Glee, which has seen both original Wicked leads Chenoweth and Idina Menzel make guest star appearances, he isn’t really seen as much of a film director. Perhaps when his second film Eat Pray Love opens next month that opinion will change. With the mega hit Chicago on his resume, Marshall seems to be the strongest contender. 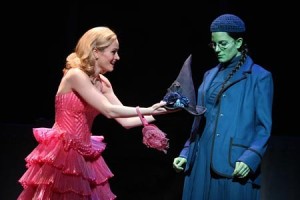 But are Chenoweth and Menzel getting a little too old to play the college-aged Glinda and Elphaba or can they convincingly pull it off in order to get an approximation of their stage performances immortalized on celluloid? Then again, Stockard Channing really didn’t look like a high school senior in Grease, now did she?

If it was decided to recast, who could they go with? Glee’s Lea Michele seems like a shoe-in for the role of Elphaba, especially if Murphy gets the directing gig. Anne Hathaway might make a good stab at the role as well. I would think Amanda Bynes would be a good Glinda, if she isn’t serious about her retirement.

I’ve often been struck by the size of the cultural and artistic changes that the 1960s saw. The best way I’ve found to really get a grip on the enormity of those changes is to [click for more]

Are You Ready For BACK TO THE FUTURE: THE MUSICAL?