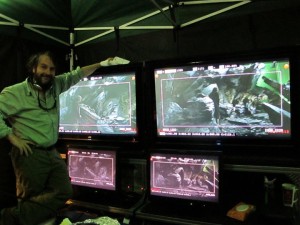 Peter Jackson’s posted another video blog from the production of The Hobbit.

While we get some more of the crew talking about their vacations during the first break in production, we also get to see what Jackson has been up to. (Not that we didn’t have a hint, anyway.)

About Rich Drees 6964 Articles
A film fan since he first saw that Rebel Blockade Runner fleeing the massive Imperial Star Destroyer at the tender age of 8 and a veteran freelance journalist with twenty years experience writing about film and pop culture. He is a member of the Philadelphia Film Critics Circle.
Subscribe