After years of development that were upset when director Edgar Wright left the project a few months back, Ant-Man is finally on track with cameras starting to roll today in San Fransisco. Replacement director made the unofficial announcement about the commencement of shooting with the following tweet (which also manages to reference a classic Steve Martin standup routine) –

Alright, gang. Today is the day. LET'S. GET. small. #AntMan

Marvel, of course, made an official announcement as well, which we have below. You’ll notice one name familiar to the Marvel Cinematic Universe – John Slattery. If you remember Iron Man 2 you probably remember Slattery’s appearance in old film footage as Tony Stark’s father Howard. (Howard Stark has also shown up in the first Captain America film, but as he is 30 years younger in the World War Two-set adventure, Dominic Cooper played the part.)

Slattery’s appearance apparently confirms the rumors that the film’s prologue will be set in the past, showing scientist Hank Pym (being played in the present by MMichael Douglas) working with SHIELD in the development of his shrinking technology that is the source of the titular hero’s powers.

SAN FRANCISCO, CALIFORNIA (August, 18, 2014) – Marvel Studios began principal photography today in San Francisco, California, on its newest Super Hero franchise Marvel’s “Ant-Man.” The film brings one of Marvel comics’ original founding members of The Avengers into the Marvel Cinematic Universe. The production also shoots on location in Atlanta, Georgia, which serves as the base for the film’s production.

Set for release in the United States on July 17, 2015, the film is directed by Peyton Reed (“Bring it On,” “The Break-Up”) and stars Paul Rudd (“I Love You Man,” “Role Models”) as Scott Lang aka Ant-Man, and Michael Douglas (“Behind The Candelabra,” “Wall Street”) as his mentor Dr. Hank Pym and Evangeline Lilly (“The Hobbit: The Desolation of Smaug,” “Lost”) as Hope Van Dyne, daughter of Hank Pym.

Armed with the astonishing ability to shrink in scale but increase in strength, con-man Scott Lang (Paul Rudd) must embrace his inner-hero and help his mentor, Dr. Hank Pym (Michael Douglas), protect the secret behind his spectacular Ant-Man suit from a new generation of towering threats. Against seemingly insurmountable obstacles, Pym and Lang must plan and pull off a heist that will save the world. 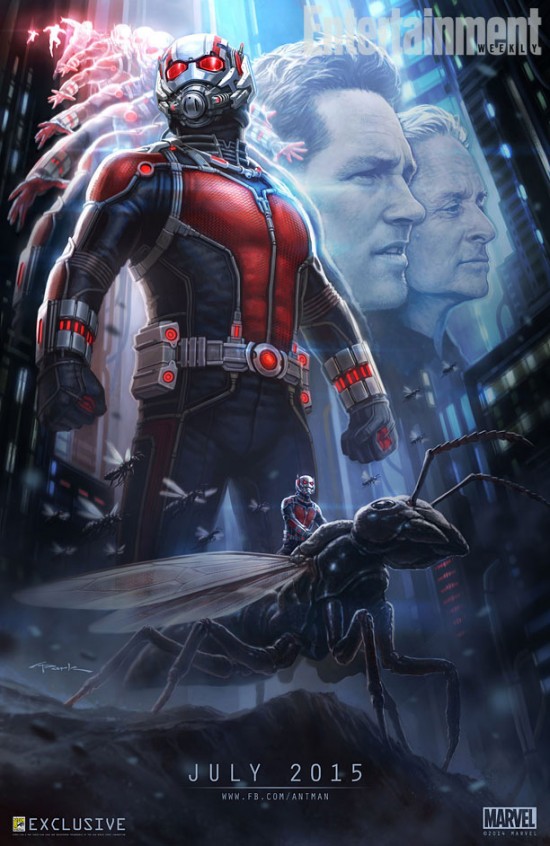 Is GUARDIANS OF THE GALAXY Marvel’s Second 2014 Film?

No, not Black Panther. The Guardians of the Galaxy. [click for more]

HISTORY OF THE COMIC BOOK FILM: Man And Iron Man

With GUARDIANS OF THE GALAXY set to be Marvel Studios next big hit, we look at the risky beginnings of the Marvel Cinematic Universe. [click for more]

[…] finally begun. Director Peyton Reed unofficially made the announcement on Twitter yesterday while Film Buff Online has given us Marvel Studios official announcement which includes a cast list and a film synopsis […]