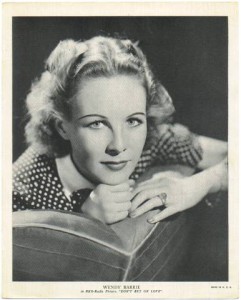 RKO continues to plunder its vaults for classic movies to remake with the announcement that it is giving a modern makeover to the 1936 comedy Love On A Bet.

The original starred Gene Raymond as a man who bets his rich uncle that he can start in New York City’s Central Park in nothing but his underwear and travel to California, arriving with a new suit, $100 in his pocket and a fiancée. The adorable and sassy Wendy Barrie co-stars as Raymond’s love interest.

Steve Carr is set to be directing this new version from a script by Dave Punch. Producer Ted Hartley told the Hollywood Reporter–

The original took place in the days where it was racy to be in underwear. This movie is going to start out with the guy wearing a lot less than his underwear. It’s going to be edgy and romantic.

I’m not sure that the words “edgy” and “romantic” really go well together. But if this project gets the greenlight – it is looking to start shooting next year – then perhaps it will help get the original version out on DVD.

About Rich Drees 6996 Articles
A film fan since he first saw that Rebel Blockade Runner fleeing the massive Imperial Star Destroyer at the tender age of 8 and a veteran freelance journalist with twenty years experience writing about film and pop culture. He is a member of the Philadelphia Film Critics Circle.

With all the hype surrounding the live action adaptation of the popular Transformers 1980s cartoon sure to make the film a hit at least over its opening weekend, it’s not surprising that we’re starting to [click for more]

The plot sounds as if inspired by an old J. Geils Band song- a guy wakes up from a four year coma to discover that his virginal high school sweetheart is now a Playboy bunny. [click for more]

If in the next year or two you get a strange sense of deja vu when looking at what Warner Brothers Studio is putting into production, don’t be surprised. According to a story in the [click for more]