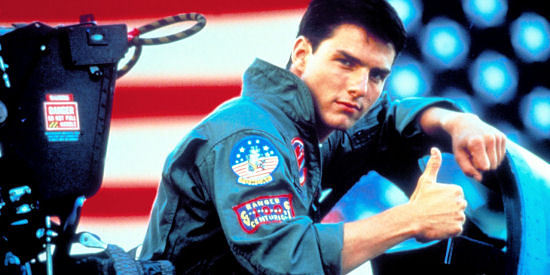 With last year’s tragic death of director Tony Scott, it looked as if the hoped for sequel to his big 1986 hit Top Gun was permanently grounded. Producer Jerry Bruckheimer, however, is determined to move forward to bring to the big screen a new story of Tom Cruise’s hot shot naval fighter pilot Lieutenant Pete “Maverick” Mitchell.

Speaking with Deadline’s Pete Hammond at the Producers Guild Produced By Conference, Bruckheimer stated that there is still interest in the sequel at the studio and with star Cruise –

For 30 years we’ve been trying to make a sequel and we’re not going to stop. We still want to do it with Tom [Cruise] and Paramount are still interested in making it… What Tom tells me is that no matter where he goes in the world, people refer to him as Maverick. It’s something he is excited about so as long as he keeps his enthusiasm hopefully we’ll get it made.

Not much is known about the proposed plot of the sequel, but it is rumored that it would in part concern the use of drones in modern warfare.

While it is great that Cruise and those involved still are enthusiastic about doing the film, I have to wonder if there is an audience out there clamoring for a sequel 27 years after the fact.

1. Knight And Day (Fox, 3,042 Theaters, 110 Minutes, Rated PG-13): I have to admit, I kind of grew apart from Tom Cruise during his hole jumping on couches, yelling at Matt Lauer period several [click for more]

New releases include AMERICAN MADE and FLATLINERS. [click for more]