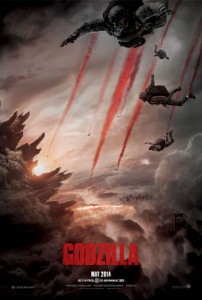 I can say that I am the biggest Godzilla fan there ever was. So it’s not like I have a vested interest in seeing the latest remake of the storied franchise.

That is, before I saw the trailer embedded below.

Yes, another trailer for the Godzilla remake has arrived, and it has a lot to entice the doubters and the faithful into theaters. From the ominous music,to the sinister tone to self-referential lines of dialogue (“In 1954, we awakened something.” Even casual fans know that 1954 was the year the first Godzilla film was made) to shocking examples of the damage the monster can do to the fleeting glances at the monster itself, you have a lot to make people want to see the final product.

About William Gatevackes 1937 Articles
William is cursed with the shared love of comic books and of films. Luckily, this is a great time for him to be alive. His writing has been featured on Broken Frontier.com, PopMatters.com and in Comics Foundry magazine.

Toho Announces Their Own GODZILLA Film For 2016

Are you ready for the face-off between two GODZILLA franchises? [click for more]

Don’t Fret, Godzilla Will Look Like Godzilla In Next Year’s American-Produced Film

A Glimpse Of The American GODZILLA’s Destructive Wake

I like the idea of rewriting the history of atomic testing in the Pacific as the military trying to destroy Godzilla.