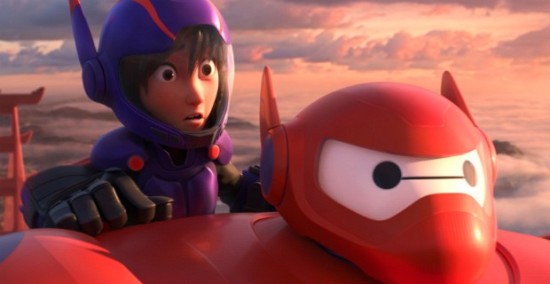 The 2014 edition of New York Comic Con got off to a big start today, with the Disney Studios film panel delivering a one-two punch previewing two of their upcoming films, Big Hero 6 and Tomorrowland. We’ll cover the Tomorrowland in a separate post, but here are a few things that we learned about the animated superteam movie Big Hero 6 from voice actors Scott Adsit, Ryan Potter Jamie Chung, TJ Miller, Genesis Rodriguez and directors Don Hall and Chris Williams.

1. Although based on a Marvel Comic created by Duncan Rouleau and Steven T. Seagle, Big Hero 6 has an unexpected connection to NYCC.

Hall explains, “I pitched Big Hero 6 right after coming to a New York Comic Con a few years ago, and I got to hold Cap’s shield. We’re super stoked to be here. This is a dream project for me. I grew up loving two things more than anything – Marvel Comics and Disney Animation.”

For Adsit, it was the excitement of being a fan who is now a guest. “it’s very strange to be up here right now, because I try to get into this room every year for the past several years. I don’t have the stamina that you guys do to wait in line. Being central to a movie like this is mind-blowing. I really can’t believe it. I thank these guys, because I’ve been a fan for so long. To be up here with these amazing actors and amazing film makers is a thrill. I come to Comic Con, and I wait in line! I go see people that I admire, get sketches – I’ve never gotten in this room before. I’m just really excited!”

2. Although Williams joked that the voice actors were forbidden from improvising, they were instrumental in the development of their characters. 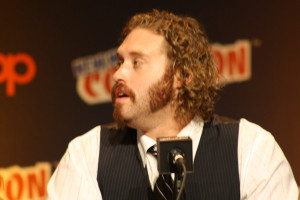 “To speak to the process [of recording one’s lines], it is weird,” Miller stated. “You’re in a room on your own, and it feels like a vacuum, but you can see them laughing, but it’s silent, so it’s so weird. You’ll do 50 different versions of a line, and they’re standing there staring at you. Like Chris said, most of the best lines came from us. It’s really amazing to see it as the story is developing, record, and then see what it is a year and a half later, what you guys have just seen, it’s incredible.”

3. The film may have a bit more of a dark edge than previously thought.

One of the clips that was screened featured the Hiro, Baymax and the team squeezed into a compact car being pursued by the film’s villain Yokai. Hall and Williams achieve a delicate balance of humor and action in the sequence, but also infuse just a slight edge of darkness. Yoaki is a scary villain and there is a palpable feeling of danger in the scene as well. This may not be a film for the youngest ones in the family. You cen see snippets of the sequence in the sizzle reel below.

4. Disney would rather fans who weren’t at the show to see some of the screened footage without it being grainy and captured on a cell phone.

For some, the event of having two former screen superheroes on stage is exciting enough, but as Michael Keaton and Edward Norton talked about it, it was hard to not get more excited for their [click for more]

If you were waiting for Disney Animation to get their hands on some Marvel Characters, your wait might be over. [click for more]

NYCC 2014: 4 Things We Learned About TOMORROWLAND

Well, OK, three things about the movie and some funny stuff with Clooney. [click for more]