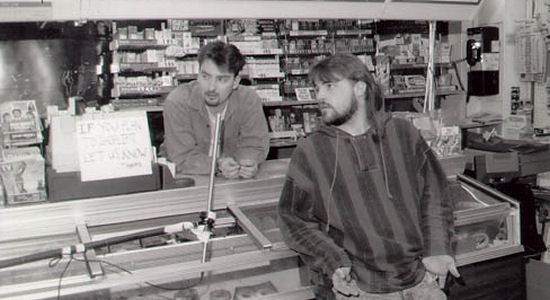 Filmmaker Kevin Smith made his bones with films set and primarily shot in his home state of New Jersey. He even called his first three films – Clerks, Mallrats and Chasing Amy – as his “Jersey Trilogy”, before the number of interconnected films reached six.

So it does come as a bit of a surprise that his forthcoming Clerks III will not be shooting in the environs of Red Bank that Smith has previously used but instead will go into production in the next state over – Pennsylvania. Smith tweeted earlier today –

Shot Jersey Girl in PHILADELPHIA in '02. We return to the scene of the crime this May with CLERKS III! #WithWhiz #tbt pic.twitter.com/MmusiG6Znk

The reason for the change in filming locations? Purely economic according to the Pittsburgh Business Times –

The Pennsylvania Department of Community and Economic Development has allocated a film tax credit for $2.11 million for the production of Clerks III, which slated to shoot in Philadelphia. On March 9, the Greater Philadelphia Film Office issued a crew call for Clerks III indicating the production is expected to take five weeks and begin shooting in Philly in early June.

While this is exciting news for Smith fans who live in the Philadelphia area (and those of us a short drive away), I dare say that the director is not abandoning New Jersey entirely. If there are some scenes set within the actual iconic Quick Stop, I can guarantee you that he will head back to Red Bank to shoot there. But other than that, let the speculation about what this news could mean begin.

It just doesn’t really feel like a Kevin Smith movie until he casts one of the group of actors who routinely show up in his comedies. And now his latest film, the crime comedy A [click for more]

Does Kevin Smith Have A Big Death Planned For MOOSE JAWS? (Spoilers)

It’s been a story that writer/director Kevin Smith has told in his numerous speaking engagements and which has been captured on his first Evening With Kevin Smith DVD. The weekend his controversial religious comedy Dogma [click for more]