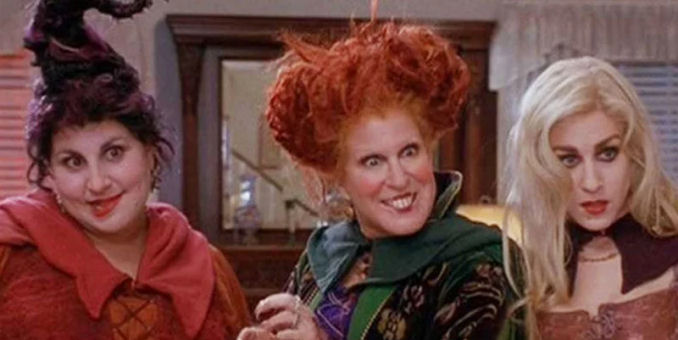 There is no word yet as to when production is set to begin for the film which will be released on Disney’s streaming service Disney+. Workaholics co-producer Jen D’Angelo is supplying the script.

The original film starred Bette Midler, Sarah Jessica Parker and Kathy Najiminy as the Sanderson sisters, three witches who were burned alive in the 17th century and who are resurrected in the 20th century, looking for a way to make sure their return to the land of the loving is permanent.

Although no deals have reached with any of the three actresses, the Hollywood Reporter states that Disney “is hoping that [they] will return.”

The original film directed by Kenny Ortega did not do well at the time of its theatrical release, but has managed to find itself an audience on Home video over the years.

Two summers ago, it seemed like New Line was very hot to have a sequel to their 2007 hit musical Hairspray, even going so far as to announce it for the summer of 2010.Well, here [click for more]

Steve Martin and Alec Baldwin may be heading to the big screen to star in a comedy from director Adam Shankman. Deadline is reporting that New Line Cinema is looking to purchase a pitch being [click for more]

Adam Shankman, the choreographer-turned-director of the musical adaptation Hairspray, is currently in talks to direct Columbia Pictures’ The 8th Voyage Of Sinbad. Based on the classic Arabian Nights tale, the Hollywood Reporter states that Sinbad [click for more]