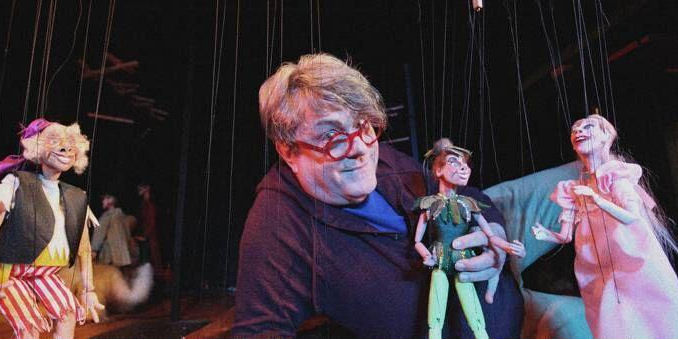 In Alexander Monelli’s debut documentary, 2017’s At The Drive-In (reviewed herehere), the director examined the lives and dedication of a small group of people who were committed to keeping a small Pennsylvania drive-in theater going in the midst of an overall dying-out of enthusiasm for that style of movie presentation. And in his follow-up Marionette Land, he turns his camera to another person in the Keystone state whose life passion is preserving an all but vanished form of entertainment.

Robert Brock has been performing marionette shows in Lancaster’s Water Street theater since 1990. Putting on these shows has not been so much a job but a calling. Brock, who admits to a life-long fascination withboth puppets and show business, writes, directs, choreographs and performsall the shows as well as builds all the sets and costumes for his wooden actors. He even lives above thethaeter in an apartment with his mother (who sometimes helps out). But whether the shows are well attended or the house only has an audience in the single digits, he marches on, giving every show his 110%.

And that is the crux of much of the story that Monelli is telling here. We see Brock preparing for a new show with the meager budget he has. But in the face of it all, even a health emergency, Brock seems undaunted. He knows that this is his life’s work and it brings him joy, if not a steady income.

“It’s show biz,” he says with a sigh and a smile at one point. “What are you going to do?”

Interestingly, this seems to be one of the first films to deal with COVID as Monelli was still in production when the lockdown hit last March. Brock was forced into cancelling plans for a 30th anniversary celebration of the theater. But even the face of that, he is perservering, looking at trying to adapt what he is doing to YouTube. And some days it feels like we could all use a bit of that boundless optimism.

About Rich Drees 6824 Articles
A film fan since he first saw that Rebel Blockade Runner fleeing the massive Imperial Star Destroyer at the tender age of 8 and a veteran freelance journalist with twenty years experience writing about film and pop culture.

Philadelphia Film Festival ’20: ACTION USA Is A Stunt-Filled Blast From The Past

Philadelphia Film Festival ’20: One’s Golden Years May Not Be SOME KIND OF HEAVEN

This debut feature from Lance Oppenheim looks beyond the idyllic facade of the Villages retirement community. [click for more]

The debut feature from writer/director Quinn Armstrong takes an offbeat story conceit to strange and exciting places. [click for more]