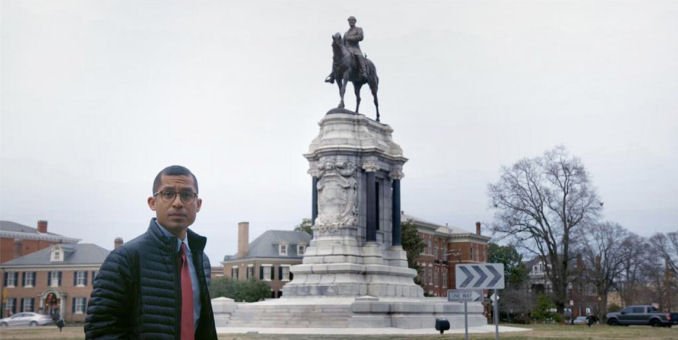 One of the many hot button issues of the day concerns the removal of Confederate war memorial statues in the south. The defenders of these monuments state that they commemorate the region’s history and if their removal would erasure of that history. (These people have obviously forgotten about books, schools and museums as places of learning.) Proponents of the statue removals state that by venerating Confederate leaders and soldier, they serve as a silent reminder to Black people that white folks are still in charge.

In 2015 when the city of New Orleans announced that they would be taking down its controversial Confederate statues, Hunt decided to document the process, a process that ultimately took 500 days from removal order to them actually coming down. And during that time Hunt sets out to explore why these statues even exist and what compels some people to defend their existence. The result is the new feature length documentary The Neutral Ground, named after the strip of grass that divides the opposing lanes of traffic on some of the city’s major thoroughfares. And in doing so, Hunt discovers that there is none to be found on this issue.

One can only have an honest debate if it is based on facts, and in the case of the discussion surrounding Confederate war monuments one side is starting from a place of propaganda. As Hunt charts out, shortly after the end of the Civil War, a century-long push began to change the cause of the conflict from their demand to own slaves to an economic conflict over states’ rights. This whitewashing became known as “The Lost Cause.”

As they say, repeat a lie often enough and it becomes the truth for people, and the lie of the Lost Cause is no exception. United Daughters of the Confederacy and others have unfortunately done their work too well in their perpetration of the lie of the Lost Cause. We are repeatedly shown people are attracted to the Confederacy because of the idea that the southern states were rebels against an oppressive federal government and nothing more. Slavery had nothing to do with it in their minds. Any attempt to show them otherwise is met with resistance.

Hunt’s fairly disarming demeanor serves the film well when he starts to embed himself with some of these southerners. No one who has been put on their guard by someone would hopefully ever say “People don’t always take care of their objects well, including when that object is a person,” and yet Hunt manages to get one to admit that right on camera.

If the tone of the film is familiar, you probably watch The Daily Show a fair amount. Hunt uses a number of the same comedic devices that the satirical news show employs to emphasize the points that they wish to make. Here, Hunt turns the camera on himself, participating in a Civil War battle reenactment on the Confederate side among other things. It is no wonder that Hunt has since gone on to become a segment producer for the show.

But The Neutral Ground isn’t all wry chuckles at the expense of people who have operated under the mis-education of the Big Lie. Hunt takes the audience to the Whitney Plantation in New Orleans, where there is a very grisly reminder of the punishment received by those who participated in an 1811 slave rebellion. It is a stark reminder that you can’t always just laugh in the Devil’s face, you also have to teach people why he is so bad in the first place.

Tribeca `21: 7 DAYS Is More Than A Coronavirus Story

A pandemic lockdown rom-com, 7 DAYS offers something new to the genre while not straying too far from its conventions. [click for more]

Tribeca ’21: INDIA SWEET AND SPICES A Familiar Taste With A Spicy Twist

A dramedy that is simultaneously universal and specific to the Indian American immigrant experience. [click for more]

With a number of movies at the Tribeca Film Festival injecting the reality of COVID into their storylines, director Jonah Feingold’s Dating & New York almost feels like a throwback to a pre-pandemic time. And [click for more]