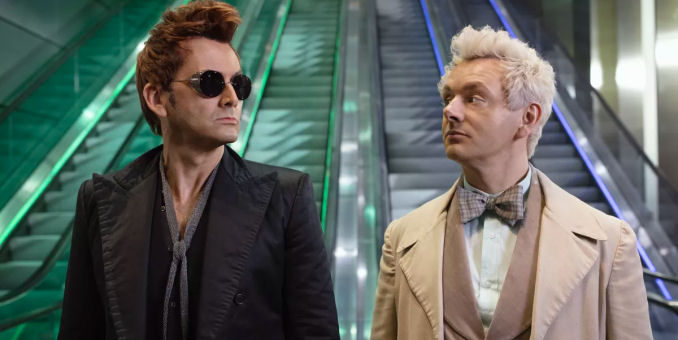 Are you ready for more nice and accurate prophecies of Agnes Nutter, witch?

Amazon has announced that they will be bringing Good Omens, the series based off o the book of the same name by Neil Gaiman and Terry Pratchett and starring Michael Sheen and David Tennant, back for a second season. Gaiman will return to once again executive produce and co-showrun alongside executive producer Douglas Mackinnon. (Pratchett passed away in 2015.)

The first season adapted Gaiman and Pratchett’s comic story of how an angel and a demon (Sheen and Tennant respectively) who have been on Earth since the Creation, team up to stop Armageddon from happening.

If you’ve read the novel, then you know that the first series pretty much adapted the book in full. So where does that leave a second season in terms of story? Well, according to Gaiman, the pair had mapped out a sequel to Good Omens while sharing a hotel room at the 1989 World Fantasy Convention in Seattle, months before the book was published. As he writes on his site –

[W]e lay in our respective beds and having nothing else to do, we plotted the sequel to Good Omens. It was a good one, too. We fully intended to write it, whenever we next had three or four months free. Only I went to live in America and Terry stayed in the UK, and after Good Omens was published Sandman became SANDMAN and Discworld became DISCWORLD™ and there wasn’t ever a good time. But we never forgot it.

It’s been thirty-one years since Good Omens was published, which means it’s thirty-two years since Terry Pratchett and I lay in our respective beds in a Seattle hotel room at a World Fantasy Convention, and plotted the sequel. (I got to use bits of the sequel in the TV series version of Good Omens — that’s where our angels came from.)

Filming is set to start later this year in Scotland.

About Rich Drees 6823 Articles
A film fan since he first saw that Rebel Blockade Runner fleeing the massive Imperial Star Destroyer at the tender age of 8 and a veteran freelance journalist with twenty years experience writing about film and pop culture.

The iconic graphic novel series is coming to the streaming service after years of being developed as a film. [click for more]

The SANDMAN creator states that there will be one major change from the comics for the upcoming television series. [click for more]

Oscar Nominations: Who Will Make The Cut?

It’s that time of year again. This Thursday, the Academy of Motion Picture Arts and Sciences will announce the nominees for the 81st Annual Academy Awards. Every year there are snubs and surprises, thrills and [click for more]