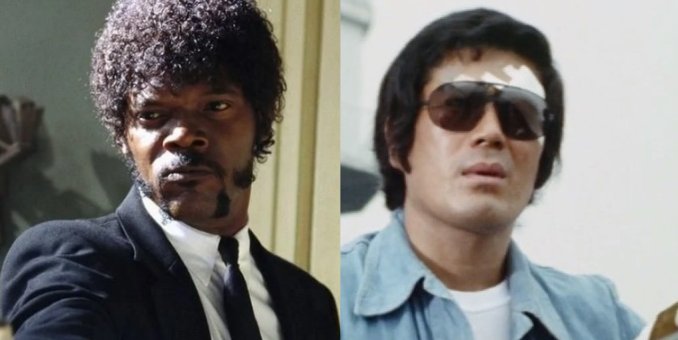 Be it coincidence or homage or the outright hope that they don’t get caught aping someone else’s movie, filmmakers have been replicating the work of those who have gone before them for some time now. Every now and then we like to stop and point out one of those instances.

We all know that Quentin Tarantino is a Sonny Chiba fan.

To be fair, Tarantino is a lover of the whole 1960s – `80s martial arts action genre, from the legendary output of the Hong Kong-based Shaw Brothers Studio to Japanese samurai films. But one of the individual stars of that genre that he has talked enthusiastically about over the course of his own career has been Japanese action star Sonny Chiba. Tarantino even cast the actor in his own epic remix of the genre, Kill Bill.

So ultimately, it should come as no surprise that one of the most iconic moments of Tarantino’s Pulp Fiction is actually a riff on the opening from Sonny Chiba’s first big hit, 1976’s The Bodyguard, aka Karate Kiba. The film was the first starring role for the martial arts actor who had spent the better part of the previous fifteen years bouncing around the Japanes television and film industry in small roles and doing stunt work. Prior to The Bodyguard, Chiba’s biggest role was a major supporting part in 1973’s Battles Without Honor And Humanity: Deadly Fight In Hiroshima. The success of The Bodyguard would lead Chiba to perhaps his most well known role in the film The Streetfighter, and its three sequels.

At the beginning of The Bodyguard, the following quote scrolls up on screen and is read in voiceover –

The path of the righteous man and defender is beset on all sides by the inequity of the selfish and the tyranny of evil men. Blessed is he, who in the name of charity and good will, shepherds the weak through the valley of darkness, for he is truly his brother’s keeper, and the father of lost children. And I will execute great vengeance upon them with furious anger, who poison and destroy my brothers; and they shall know that I am Chiba the Bodyguard when I shall lay my vengeance upon them!

Of course, if you crack open your family Bible, or check out one of the many available online editions, you’ll see that while the concluding two sentences – minus the reference to Sonny Chiba himself – can indeed be found in the book of Ezekial, the first half of the quote is actually fabricated from various other Biblical fragments.

But it sure sounds like “a cool thing to say,’ doesn’t it? That’s the reason why Samuel L Jackosn’s Jules Winnfield likes to say it before he shoots someone in Pulp Fiction. In fact, Tarantino gives the character three different moments where he recites a slightly modified version of the quote.

The path of the righteous man is beset on all sides by the inequities of the selfish and the tyranny of evil men. Blessed is he who in the name of charity and goodwill shepherds the weak through the valley of darkness, for he is truly his brother’s keeper and the finder of lost children. And I will strike down upon thee with great vengeance and furious anger those who attempt to poison and destroy My brothers. And you will know My name is the Lord when I lay My vengeance upon thee.

It is worth noting that each time Jules recites that quote in the movie, he does so by placing different inflections and emphasis on the passage. This reveals the character’s own arc through the story from stone cold killer through to the spiritual awakening he has at the end of the film’s narrative.

Be it coincidence or homage or the outright hope that they don’t get caught aping someone else’s movie, filmmakers have been replicating the work of those who have gone before them for some time now. [click for more]

Tarantino States His Next And Last Film Will Be “Epilogue-y”

The director is already making cryptic statements about his next, and what could be his last, project. [click for more]

If his quick cameo at the end of last summer’s Iron Man was enough to leave you wanting to see more of Samuel L. Jackson as spymaster Nick Fury, than you have a lot to [click for more]