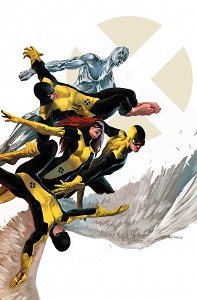 With 2006’s X-Men: The Last Stand pulling in $459 million at the box office world wide, it seems only natural that studio Twentieth Century Fox is looking to extend its X-Men comic book movie franchise beyond next summer’s X-Men Origins: Wolverine and their planned X-Men Origins: Magneto spinoff films.

Towards that end, the studio has brought on Josh Schwartz, creator of the teen soap opera Gossip Girl, to script X-Men: First Class, which will focus on a group of younger mutant heroes, some of whom have already appeared in the previous three X-Men films.

Variety reports that the studio is hoping that Schwartz, who has also created the teen-oriented The OC and the comedic spy series Chuck, is “expected to inject a next-gen sensibility into the superhero series.”

The X-Men universe certainly holds plenty of storytelling opportunities. The original 1960s comic book series, about a group of teens who received superpowers through an accident of birth and who fought to overcome the fear and prejudice they encountered because of their differences, is often seen as an allegory for the then current Civil Rights movement. Writer/director Bryan Singer tapped similar allegorical territory for the first two X-Men films, when he drew parallels between the mutant heroes and the gay rights movement.

Officially, Fox has been keeping quiet about its plans for the future of the X-Men franchise. However, hoping that Schwartz will “inject a next-gen sensibility into the superhero series,” sounds more like a marketing decision than any kind of storytelling one. And while studios are definitely in the business to turn a profit, turning the franchise into some angst-ridden teen soap opera is probably going to alienate a lot of fans, ultimately diminishing the odds that Fox will be able to milk the concept for additional sequels. Of course, super powered soap opera is what has been fueling the Superman-as-a-teen television series Smallville for nearly eight years now. That show has been getting continuously good ratings while annoying many comic book collectors who feel it has habitually strayed far from the traditional story of a young, pre-Superman Clark Kent. Can a balance be struck to appease both fans and the general public? Singer was able to do it with his first two films. Hopefully, that kind of lightening in a bottle can be captured again.

About Rich Drees 6757 Articles
A film fan since he first saw that Rebel Blockade Runner fleeing the massive Imperial Star Destroyer at the tender age of 8 and a veteran freelance journalist with twenty years experience writing about film and pop culture.

Hot on the heels of the leaked Captain America: The First Avenger concept art, comes some art of Chris Hemsworth as Thor. These pictures give us a full body look at the costume, whereas the [click for more]

It certainly seems like the Powers That Be in Hollywood have recently discovered the works of pulp writer Robert E. Howard judging by the number of projects based on his creations that are currently in [click for more]

Warner Brothers has hired Changeling scribe and Babylon 5 creator J. Michael Straczynski to script a remake of their 1956 classic film Forbidden Planet. The original, loosely based on Shakespeare’s The Tempest, tells the story [click for more]