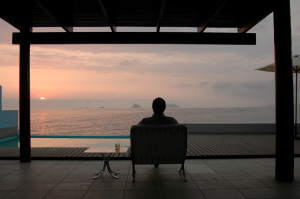 In 1926, F. Scott Fitzgerald began “The Rich Boy,” one of his most notable short stories, with this line, ”Let me tell you about the very rich. They are different from you and me.” Over the years this line has been misquoted numerous ways, but the meaning is always the same; the rich are different breed. Writer/Director Josue Mendez may have had that in mind when he set out to make Dioses, a pitch black comedy about the foibles of one particular rich family in Peru.

The film begins with us watching Andrea (Anahi de Cardenas), a pretty young woman dancing to techno music while various young men come up and either join her in oblivious movement or start snogging her on the dance floor. While this is happening we see Diego (Sergio Gjurinovic), a handsome young man with dark curly hair getting angrier by the second as he watches this licentiousness to the point where he angrily berates Andrea near the rest rooms.

Initially, I felt sorry for Diego and his humiliating rejection. Only later do we find out that Andrea is not his girlfriend, but is his sister although it soon becomes clear that Diego wouldn’t mind if Andrea were his lover. The scene where Diego masturbates over her passed out body is a dead give-a-way on this plot-point. Let me state clearly that incestuous relationships between brother and sister are not caused by economic prosperity. You need only visit some of the poorest hollers in West Virginia for proof of that.

Lest you think it is only the children of this family that are bent toward lassitude and suspect behavior, we don’t have to look any further than the “adults” in the household. Augustin (Edgar Saba), the patriarch is a tough old goat who has made a fortune with a metal foundry and is now no longer in need of his children’s birth mother. In fact, he has recently traded her in for a well deserved “trophy wife”, who coincidently, is not much older than his own daughter.

For her part, Elissa the “trophy wife” (Maricielo Effio) works very hard at her new job of pleasing Augustin. For example, she walks around the house without a top on exposing her pert young breasts. She also tries to keep up with all the other rich wives by studying botany, the Bible and Greek mythology because she has heard them all make comments about these subjects and she has to learn them chop-chop. Her greatest fear is displayed to us in a dream where her poor mother comes to her new abode bearing homemade tamales, but also with her grandmother who for goodness sakes is wearing a traditional costume of Peruvian mountain people. This nightmare causes Elissa to wake up screaming more than once.

But its true, even poor people don’t like to be reminded of where they came from, especially if they still have family living there. Why do you think they invented malt liquor? 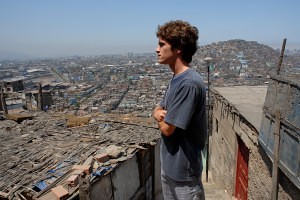 If I have painted a bleak picture of the life led by the main characters in Dioses, I can assure you it is much worse than I have described. It is also enlightening, funny, colorful and bizarrely attractive. But, like Luis Bunuel in his later life, after years of railing angrily against the upper classes, he finally came to the conclusion it would be best to simply look at them and just laugh at their stupidity and their foibles.

I think Writer/Director Josue Mendez is doing that at the very end of Dioses. Why? Well, the only character who even tries to escape from his privilege is the young pervert Diego. Diego considers the wastrel life of his friends with their endless partying, drinking, drugging and just plain uselessness. He considers working under his father’s thumb at his factory where he is guaranteed a position no matter how inept he may be (good thing he’s not in politics), and none of this is appealing to him.

It seems that the only “real” people he knows are his maid and housekeeper. One night, when the world of the rich gets to be too much, he goes to the home of his housekeeper, riding there on an over-crowded bus. He sees the tightly packed slum houses where the workers live where there is nary a sea breeze and even the sun doesn’t shine in the dark congested alleyways. Diego stops and watches as the neighborhood kids play an invigorating game of soccer in a dusty field and then stands on a high ridge and looks out at the homes of the poor with a new found respect and we feel he’s learned a valuable lesson.

But then Diego goes to use the housekeeper’s bathroom. There he finds a cracked toilet bowl which he would have to squat over to poop in and a bucket of slop water next to it to wash it down the tubes and out into the street. That’s all it takes to redeem the rich in this film! They may be shallow, cruel, incestuous, alcoholic and immoral; but at least they have proper plumbing! In the very next shot we find Diego sprucing up in a proper bathroom. We then see him interact with guests at a wedding going through all the social niceties and banal conversation he needs to so as to remain amongst the privileged in Peru. All of this pretense just so he can have a clean, private place to pee.

This is joke ending worthy of Luis Bunuel. See Dioses, it’s a terrific film, beautifully shot with excellent performances and dark strain of humor that will sneak up on you when you least expect it.