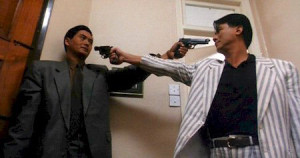 It’s looking like the long in development remake of Hong Kong action director John Woo’s seminal The Killer may be finally moving forward. Woo and producing partner Terence Chang announced today through a press release from their Lion Rock Productions shingle that the film is being actively prepped for production. John H. Lee has been attached to direct this English-language remake since 2007 and Korean actor Jung Woo-Sung (Reign of Assassins, The Good, The Bad, The Weird) is set to star. The film is set to be in 3D.

As Woo explained in the press release –

While all my films are special to me, The Killer is truly one of my favorites. We are thrilled to reinvent it as an English-language film and know it’s in capable hands by the incredible visual style and tender emotion John H. Lee brings to all his films.

A remake of The Killer was first attempted in the early 1990s when action writer/director Walter Hill took a stab at a screenplay. A couple of years and a few different script drafts later the project had stalled out. This new version was first announced in 2007, though not much news has leaked out of the project since then.

Of course, we all know that just announcing a film isn’t the same as actually making the thing. It is possible that Woo and company are just starting to bang their particular drum in advance of next month’s European Film Market at the Berlin International Film Festival. I would not be surprised if the money from pre-selling the film to distributors in numerous countries is instrumental in funding the production.

Like many of his brethren of the Hong Kong cinema scene of the 1980s and 90s, director John Woo has not had much luck in trying to replicate his success within the Hollywood studio system. [click for more]

Woo, Berg, and Singer Go RADICAL On The Big Screen.

One of the more odious trends I noticed at the San Diego Comic-Con was the one where new comic publishers start publishing comic books not to make great pieces of fiction, but to create high-concept [click for more]

HISTORY OF THE COMIC BOOK FILM: Off the Radar

The popularity of comic book films compels the studios to look outside the big two for properties to adapt. [click for more]