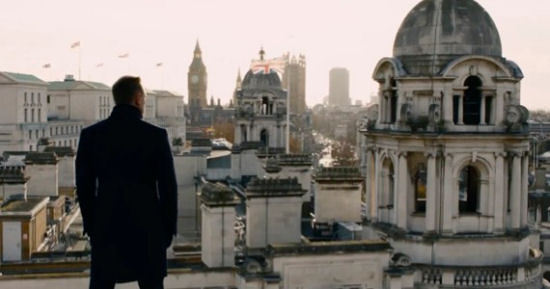 Although we here in the US have a few more weeks to wait, the latest James Bond adventure Skyfall opens in the UK this Friday. The film’s Royal Premier was held last night in London and our go-to guy on all things James Bond, Tom S., was there and filed this report. Now he doesn’t go into spoiler territory at all, this is just some quick impressions on the film.

After a four year gap, Bond is back, well almost. Despite being Craig’s third outing as 007 in the rebooted franchise, the filmmakers have only finally gotten to the point where we can say, our classic James Bond is back, but we will have to wait till Bond 24 to find out for sure.

Attending the Royal premiere is always a magical experience and last night was no exception. The film was very well received and definitely introduced new elements into Craig’s world of Bond which were a hit, such as a very rousing round of applause when a certain car was revealed, not to mention an incredibly clever past reference, which although cute, led to much continuity debate amongst us Bond geeks into the wee hours.

Overall impressions…great installment into the new world of James Bond. Purists may still take issue, but the film offers enough edge of your seat excitement for even the casual filmgoer.

Well, it sounds like the four year wait through MGM’s financail difficulties was worth it. Now it is just two more weeks until the film’s November 9th release stateside.

Hollywood gives James Bond a wide berth this weekend. They should. [click for more]

BOND 23 Gets A Director

They may not know yet when they’ll be rolling cameras, but we know who will be yelling “Action!” on the next James Bond adventure. American Beauty and Revolutionary Road director Sam Mendes is currently in [click for more]

If you think you know who all has been cast in the upcoming twenty-third installment of the James Bond franchise, director Sam Mendes has a surprise for you. It is being reported in the British [click for more]

A Quick Report From The SKYFALL Royal Premier http://t.co/J0TV5zEW