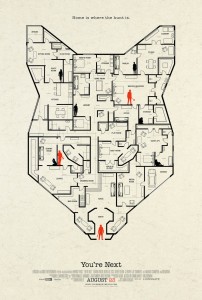 1. You’re Next (Lionsgate, 2,435Theaters, 95 Minutes, Rated R): It doesn’t take much to create innovation in the horror genre. Look at Scream. All it basically did was introduce horror films into the world of that particular horror film. All of a sudden, the film became a metacommentary on the genre and therefore became innovative.


This film has also received some acclaim for renovating the genre, but really all it is is a bunch of genre tropes combined together to create something new. It’s “Home Invasion” plus “Masked Assailants” plus “Slasher Film” plus “Ten Little Indians” plus “Girl Fights Back.”

This doesn’t mean the film won’t be good. Word of mouth has been great and it follows two of Bill’s Rules for Horror Movie Success: it’s short and it’s R rated.

The plot involves a rich family gathering in a remote mansion to celebrate an anniversary. Unfortunately, a group of marauding serial killers happens upon the house seemingly at random during a killing spree in the neighborhood. Family members die one after another, and the carnage continues until a girlfriend of one of family decides to fight back.

2. The World’s End (Focus Features, 1,548 Theaters, 109 Minutes): It should come as no surprise to readers of mine that I love the films coming from the  trio of Simon Pegg, Nick Frost and director Edgar Wright. I thought Shaun of the Dead was a witty take on the just become overplayed zombie genre. I thought that Hot Fuzz was a brilliant appliance of the American police action film tropes to the typical British crime drama. I even like them when apart. I like Paul, which featured Pegg and Frost  but not Wright and I loved Wright’s Scott Pilgrim vs the World.

So it pains me to see that this film will get absolutely crushed in theaters this weekend. It’s paltry theater count means that it will be hard for it to make an impact. I’d wager a bet that it isn’t even playing in most places in the country at all.

Which is a shame because I was hoping this film would open bigger, both in terms of theater counts and in box office receipts. It details a man who is stuck in the past reuniting his mates to complete a legendary pub crawl they didn’t finish when they were younger. But as often happens, a lot has changed in the years they were away. There are a whole lot more Starbucks, everything is a lot cleaner, robots have replaced all the locals, you know, the usual.

Please make an effort to see this in the theater. It deserves it and you deserve it.


About William Gatevackes 1981 Articles
William is cursed with the shared love of comic books and of films. Luckily, this is a great time for him to be alive. His writing has been featured on Broken Frontier.com, PopMatters.com and in Comics Foundry magazine.

It’s a shame that Goose isn’t still around, because this would have been his and Maverick’s favorite film. [click for more]

Fans of Quentin Tarantino and Robert Rodriguez’s mashup love letter to the exploitation cinema of the 70s, Grindhouse, may have reason to rejoice. Director Edgar Wright tweeted yesterday – Since Don’t is one of the [click for more]