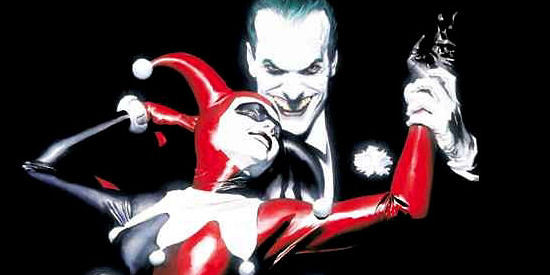 Warner Brothers may have found their supervillain power couple in the form of Jared Leto and Margot Robbie.

This weekend reports began to surface that Leto has been approached to play DC Comics Clown Prince of Crime, the Joker, in Suicide Squad, a comic book adaptation that writer/director David Ayers has described as “The Dirty Dozen with supervillains.” And now Collider is reporting from unnamed sources that Robbie has indeed been chosen to play the Joker’s occasional paramour/cohort-in-crime, Harley Quinn.

If both of these report are true, Leto and Robbie would be joining other potential castmates like Jessie Eisenberg reprising his Batman V Superman: Dawn Of Justice role of Lex Luthor, Will Smith and Tom Hardy.

For the uninitiated, Harley Quinn is a former psychologist who was treating the Joker during one of his many incarcerations at Arkham Asylum. She developed a rather unhealthy attraction to him and, throwing off her professional training, embarked on a life of crime as a way to impress him and attract his attention. The two have teamed up on occasion, though the Joker is often quick to discard her when her presence no longer suits his needs.

Leto has yet to pick a project to follow up his Academy Award-winning performance in last year’s Dallas Buyers Club, and this would certainly be an interesting choice for him if this pans out.

After demonstrating some impressive acting chops in last year’s The Wolf Of Wall Street, Robbie, a former Australian soap opera star, has been one to watch in my estimation. Given Suicide Squad‘s looming 2016 release date, I am assuming that as soon as she wraps up her work on David Yates’ new version of Tarzan, in which she plays Jane Porter opposite Alexander Skarsgård’s titular jungle ape man, she’ll move onto this film. She’s also finished a couple of other films that should help build her profile over the next year and a half until Suicide Squad hits theaters.

And, perhaps unsurprisingly, it’s a bit of a mouthful… [click for more]

Warner Brothers made a number of changes to their schedule, including two new DCEU films added in 2020. [click for more]

STATE OF THE COMIC BOOK FILM: Hills And Valleys

What is the state of the comic book film in 2016? Highs and lows. [click for more]