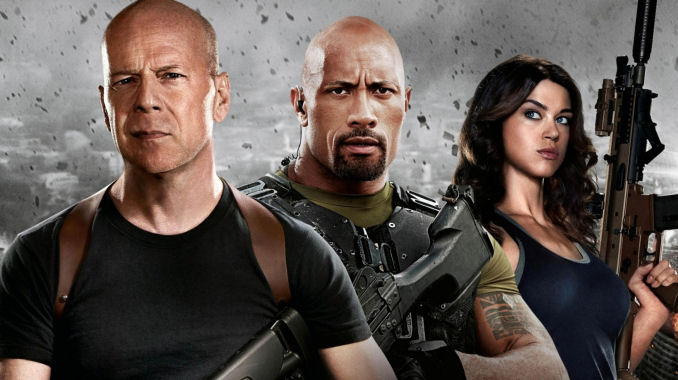 Hasbro and Paramount have had pretty good success with their four Transformers films. Sure, they are terrible movies, but that hasn’t stopped them from pulling in a combined gross of somewhere in the neighborhood of $3.7 billion at the worldwide box office. So it shouldn’t come as much of a surprise that that the toymaker and the studio would like to replicate that magic with some new franchises. And true to the form of what just about every other studio is doing, they are looking to make these separate movie series part of a larger, interconnected cinematic universe.

In a statement released today, Paramount and Hasbro announced that they would be making new films featuring such toylines as Micronauts, Rom, Visionaires and MASK that would interconnect with the already existing GI Joe franchise.

“Paramount and Hasbro have had a longstanding relationship and we’re proud of the success we’ve enjoyed on the ‘TRANSFORMERS’ and ‘G.I. JOE,’ franchises,” said Brad Grey, Chairman and CEO of Paramount Pictures. “We’re excited to grow our agreement and make even more movies based upon these popular and powerful Hasbro characters and their worlds.”

Allspark Pictures, Hasbro’s film label, will produce the films and Brian Goldner (Chairman, President and CEO, Hasbro), Stephen Davis (Executive Vice President and Chief Content Officer, Hasbro), and Josh Feldman (Head of Film Development, Hasbro) have worked closely with Paramount in shaping the interconnected universe for the properties. To develop the creative roadmap for G.I. Joe, Micronauts, Visionaries, M.A.S.K. (Mobile Armored Strike Kommand) and ROM, Hasbro and Paramount will assemble a writer’s room which will include some of the most notable creative talent in Hollywood.

“Hasbro and Allspark Pictures put storytelling at the center of everything that we do. These brands are filled with memorable stories and vivid characters, and this Universe creates a framework for how they will become interconnected,” said Brian Goldner, Chairman, President and CEO of Hasbro. “Extending our partnership with Paramount allows us to continue our long-term strategy and overall vision to build dynamic worlds for all of our brands, and we are thrilled to collaborate with them as we develop these properties.”

According to Deadline, leading the creative charge on this endeavor will be Akiva Goldsman, the Academy Award-winning screenwriter of A Beautiful Mind, who has previously spearheaded a writers room conference that spawned ideas for three additional Transformer films and a similar writers room for Hasbro and Paramount’s GI Joe franchise.

First of all, is there really enough of a love out there for films based on the old MASK and Visonaries toy lines? While I am sure that they have their die hard fans, is that enough of a base to really try and build their own film franchises on? Jem And The Holograms was a fairly well-remembered cartoon series and toy line from the 1980s and the live action film based off of that crashed and burned somewhat spectacularly earlier this year.

But my big problem with this is that Hasbro is obviously in part banking on the nostalgia and love for some these characters – specifically the Micronauts and Rom – to power these new films. However, some of that love and nostalgia extend from fans’ memories of those properties’ comic book adventures. In the 1980s, Marvel Comics produced licensed comic book series based on both the Micronauts and Rom toys. But in addition to using the toys and their backstories as devised by the toy company as gist for the comic book adventures, new characters and concepts were also created, which remain the property of Marvel. That is why a fan favorite character like Marionette, Arcturus Rann and Bug who first appeared in the Micronauts comic book can still appear elsewhere in Marvel’s universe but other characters like Acroyer and Baron Karza can not. As a toy, Rom came with very little in the way of background and it was Marvel writer Bill Mantlo, who was already doing similar work on Marvel’s Micronauts series, to more fully flesh out the character and his world. Next summer, IDW is launching a new comic series featuring Rom, but it won’t be able to draw from the wide mythology for the character developed by Mantlo and fans aren’t too happy about that. Will the writers that Goldsman and Hasbro has working on these new films be able to create something comparable? They have a tough row to hoe ahead of them.

The comic is looking to star in an adaption of the board game. [click for more]

A real American pasttime like the Superbowl seems like the perfect place to debut some new footage of the cinematic adaptation of some real American heroes, GI Joe. The first of many new commercials for [click for more]