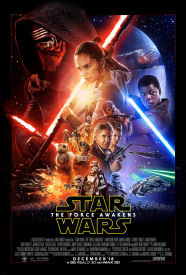 There’s no way to not talk about the new Star Wars movie, The Force Awakens, without getting into spoilers. Director JJ Abrams and Lucasfilm have done a pretty good job in keeping almost all of the key dramatic elements of the film hidden from the general public and if you are one who wants to go into the theater with as little foreknowledge as possible, than just know that for my money’s worth, Star Wars: The Force Awakens is neck-and-neck with The Empire Strikes Back for being the best Star Wars film of the seven movie franchise. And that I will be discussing spoilers for the film starting in the very next paragraph.

One thing that everyone seemed to have immediately picked up on these last few months, is that the advertising leading up to the release of The Force Awakens has been lacking virtually any image of Mark Hamill as Luke Skywalker, the hero of the original Star Wars trilogy. We have been told by the filmmakers there is a reason for that and that reason is given to us right in the first line of the film’s opening text crawl – Luke Skywalker has vanished. The whys and wherefores are the engine that drives The Force Awakens and are doled out in broad strokes over the approximate two hours of the film. They are things that have lead to both galactic and very personal tragedies for our now aging heroes.

The film opens with the Resistance, the group that continues to fight the remains of the old evil Empire which has become known as the First Order, gaining information that could lead them to the missing Jedi Luke Skywalker. Almost immediately, the pilot who is attempting to get that information back to them, Poe Dameron (Oscar Isaac) is captured by Kylo Ren (Adam Driver), one of the leaders of the First Order and a user of the Dark Side of the Force, but not before Poe entrusts the map to Skywalker with his droid BB-8, who manages to escape. Poe is freed from captivity by Finn (John Boyega), a First Order stormtrooper who has managed to shake off his indoctrination and wants nothing more than to get as far away from the First Order as possible. Crashlanding on the planet Jakku, the pair are separated. Finn manages to meet Rey (Daisy Ridley), a scavenger who has already befriended BB-8. Pursued by the forces of the First Order, the three make their way off planet, meet up with Han Solo (Harrison Ford) and head to the forces of the Resistance, still under the command of Leia (Carrie Fisher). But the hunt for Skywalker has to take a back seat to the threat of the First Order’s newest superweapon, Starkiller Base, which Finn has information about that could turn the tide of the upcoming battle.

(If that short description doesn’t suggest it enough, let me state that coincidence does play a large part in Star Wars films.)

As director, Abrams manages to add more visual poetry than franchise creator George Lucas ever managed to in small moments like Rey “sledding” down a sand dune early in the film. But he doesn’t skimp on spectacle either. The ground and space battles are as exciting and fun-filled as one would hope for in a Star Wars film. He has studied the films that have come before and delivers big heaping doses of what fans expect from the series. Abrams has also restored the franchise’s sense of high adventure and sense of humor, welcome returns after the dour and po-faced prequel trilogy.

True, there are many parallels to the first Star Wars film to be found here. The map with the location of where Luke Skywalker has been in hiding is certainly a McGuffin on par with the original film’s Death Star plans. They both are information that the bad guys want and the good guys are racing to get to the bigger army of good guys in order to act upon. We have desert planets, deadly superweapons in the hands of the bad guys, dashing hotshot pilots and seemingly innocent bystanders fated to be swept up into intergalactic affairs.

But these are just surface similarities, variations on a theme whose familiarity is there to aid audiences in acclimating to the new characters and situations that will be propelling the franchise into the future. And the devil is in the real details here, as the new heroes we are introduced to – Finn and Rey – are pretty much not like any character we’ve seen in the Star Wars Universe so far.

To be sure, there are some surface similarities Rey shares with the Luke Skywalker we first meet in the original Star Wars. But Rey feels like a much more rounded character. She is self-reliant, having lived on her own for years. She is resilient, but does expose some vulnerability, like when Han suggests that he might be looking a second mate for his crew. Most female action film leads fit into a certain mold where they are just required to look hot and be extraordinary fighters. Abrams eschews that stereotype in favor of making Ren a much more rounded character. True, there are still some things about her past that the movie has not revealed, but I dare say that those secrets will become grist for the mill of the next two installments.

As a stormtrooper who has gone AWOL, Finn does share some traits with Rey. Neither of them really knows their family, something that perhaps helps to cement their friendship. And as someone who has seen the horrors of the First Order up close, his experiences help present the evil of the bad guys on a personal and relateable level that works far more than any more abstract act of villainy such as destroying an entire planet could ever hope to do.

Interestingly, it is Han Solo who finds himself thrust into the mentor role of the film for these two, assuring Rey and Finn that indeed the legends of the Jedi and the heroes of the Rebellion are all true. For someone who was first introduced into the series as an outright skeptic about the Force, this marks the conclusion of a character arc that was hinted at The Empire Strikes Back and Return Of The Jedi. But, anyone familiar with the Star Wars franchise and its use of Joseph Campbell-derived archetypes will very likely guess as to what this will mean for Han. Sure, it is a moment that will surprise fans, both die hard and casual alike, and perhaps anger many. But it is a bold, and perhaps inevitable, choice on the part of the filmmakers, and one that certainly sets up much for the next two films to explore.

The Star Wars saga has always ultimately been about the Skywalker family and this film takes the family into a new, shattered place. We don’t get all the details as to how Luke’s burgeoning attempt to bring back the Jedi order was destroyed, but we do know who did it. And we know the effect that it has had on Han and Leia’s marriage. There is an emotional depth to this fallout, the likes of which have never really been plumbed before in the series. The tragedy of that unseen event is still reverberating in the Skywalker clan and will be for the foreseeable future.

In Kylo Ren, Abrams has crafted perhaps the most complex cinematic Star Wars villain to date. In the original trilogy, Darth Vader was pretty much a one note black hat until the second half of Return Of The Jedi. In the prequel trilogy, Palpatine during his political rise to the point where he can have himself declared Emperor is the nominal villain, but he too is one-dimensional. We never even know what brought him to the Dark Side, he’s just evil. But Ren is a villain who has doubts about the path he is on. He is a pawn of a bigger evil and through his conflicted feelings, seems just on the verge of discovering that he is nothing more than a tool for the First Order’s Supreme Leader. There is a lot at play with the character and Driver does great work with the material. Hopefully this complexity will continue to be played out and explored as the rebooted franchise continues.

Finally, it should be noted that Abrams’ assertion that this film can stand on its own is partly a lie. While he does a good job in keeping a good portion of the story self-contained, several story lines can only be described as having reached a resting pace for the time being, not a resolution. One main plot line by its nature ends on the films’ closing moment but which still leaves us counting down the days until Episode VIII appears in theaters on May 26, 2017.

About Rich Drees 6865 Articles
A film fan since he first saw that Rebel Blockade Runner fleeing the massive Imperial Star Destroyer at the tender age of 8 and a veteran freelance journalist with twenty years experience writing about film and pop culture.

More books from a galaxy far away are coming to a book store near you. [click for more]

The new release for 3D home video will contain a number of new special features including never-before-seen deleted scenes. [click for more]

Very solid; and I agree with many of the points you make.

Great review! And I agree that the film does not stand on its own. Andrea has never seen a Star Wars film at all, and her only knowledge of anything SW related is from what my 5 year old sons tell her. She thought the movie was confusing and made no sense. :)